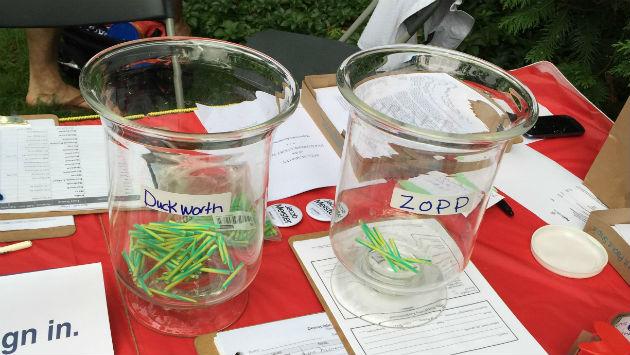 Democratic Party of Evanston members voting over the weekend in a straw poll on next year's Democratic primary candidates for U.S. Senate came out strongly in favor of U.S. Rep. Tammy Duckworth of Hoffman Estates over Chicago Urban League head Andrea Zopp.

Committeeman Eamon Kelly of the DPOE says the vote was 45 for Duckworth to 8 for Zopp.

Zopp spoke at the event, Duckworth was represented by U.S. Rep. Jan Schakowsky of Evanston.

Kelly says party activists hope to "finally retire" the Republican incumbent, Mark Kirk, "once and for all next year."

Schakowsky said the Washington Post and Politico have rated the Illinois senate contest the number one pickup opportunity for Democrats next year, and she praised Duckworth for what she described as efforts to make Illinois a place that looks after its middle-class families and small businesses.

Zopp, who's also a member of the Chicago public schools board, is a former county prosecutor and corporate attorney. Duckworth, a disabled veteran of the Iraq war, is the first Asian-American woman from Illinois to serve in Congress.