The Evanston/Skokie District 65 School Board received an update this week on the creative drama offerings in the district, which this year have been expanded to all levels, from kindergarten to eighth grade.

A panel of teachers, consisting of Betsy Quinn of Haven Middle School, the district’s Drama Department Chair, and three members of her department, presented a brief history of the program and an overview of the curriculum to the board Monday night at its monthly “working” meeting.

Drama was a potential casualty in budget negotiations this year, but parents and teachers lobbied strongly to prevent significant cuts to the program.

It was believed to be a significant issue in contract negotiations with the teachers that were resolved just as school resumed after Labor Day.

The upshot was that drama was added this year to the Fine Arts program for grades K-3, thereby providing a K-8 drama program for the district. 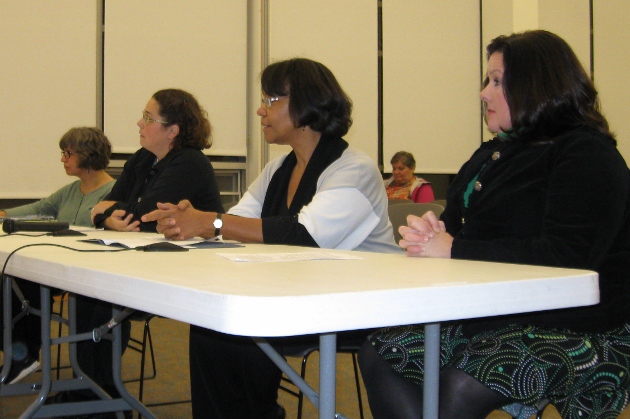 The other three teachers, Gloria Bond Clunie of Chute Middle School, Jamie Querciagrossa of King Lab, and Laurel Serleth of Washington School, revealed in response to a question from board President Katie Bailey that they were all budding actresses before they turned to teaching.

The District 65 Drama Department was established in 1927 by Winifred Ward, a professor at Northwestern University and founder of the Creative Drama Movement. It is reputed to be the longest thriving creative drama program in the United States.

It survived budget cuts in the 1970s, when some elementary arts programs, including drama, were suspended, and again in 2002, when the K-3 program was put on hold.