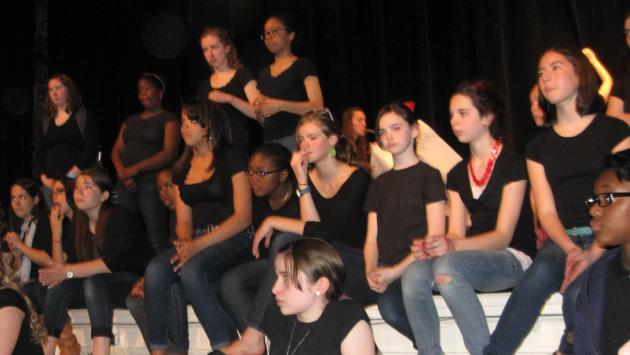 What’s it like to be a girl at Evanston’s Haven Middle School, or at Northwestern University, for that matter?  There’s not a great deal of difference, as it turns out, which is the subject of a joint production between the two schools that made its debut at Haven on Friday.

The Blue Violets Project, named for the Illinois state flower, was the idea of a group of theater students at Northwestern who approached Haven drama teacher Jenna Temkin with the idea of collaboratively creating a 40-minute play that would explore themes and experiences common to young females, whether at middle school or the university.

The first performance, at noon Friday, was performed for all the seventh grade girls at Haven. Two more performances will be held at Harris Hall on the Northwestern campus—at 7 p.m. Friday and 4 p.m. Saturday– for the general public, both male and female.

The cast consists of 24 Haven girls, performing alongside 14 Northwestern coeds.  To this male reporter, it was difficult to tell the two apart.

One of the Northwestern students confessed to the audience that she approached the project with a feeling of “excitement and crippling anxiety.”

How girls treat each other, how they look in the mirror, and how they cope with attitudes and ideas that may differ from the prevailing view were among the issues addressed.

Temkin, who divides her teaching time between Haven and Chute middle schools, said she hopes this will be the first of many collaborative efforts between District 65 and the university, and she held out the possibility that future projects might involve male students as well.

Top: Cast engages in "girl talk" with the audience of seventh grade girls at Haven.