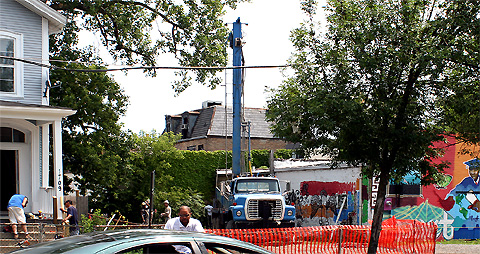 A big blue truck with a derrick on it spent several days earlier this month drilling holes in the ground behind a store on the northeast corner of Church Street and Dodge Avenue.

But it wasn’t a sign that wildcatters hope to find oil under Evanston.

Instead it they were looking to exploit a different energy resource — the constant temperature under the earth’s surface.

Developer Daniel Cheifetz, who controls a trust that owns the lot where the rig was drilling, told residents at a Fifth Ward community meeting last week that the project “will be used to provide heating and cooling for a cultural center we’re putting together there.”

Mr. Cheifetz said the rig drilled 13 holes, each 150 feet deep. The crew, from Community Builders of Evanston, then put a loop of tubing into each hole. The tubing will be filled with a mixture of water and glycole, an antifreeze, that will connect to a heat pump inside the building.

The constant underground temperature, he said, allows the system to provide heating in winter and cooling in summer.

The Community Builders program, he added, was begun about a year ago to train young Evanston residents in building trades skills and in the running of a construction company.

He said the crew has now moved on to work on a project in Winnetka.

Mr. Cheifetz said the geothermal system is relatively expensive to install but much cheaper to run than a conventional heating and cooling system.

He said he hopes the geothermal system can be used more widely to provide heating and cooling for homes in the community.