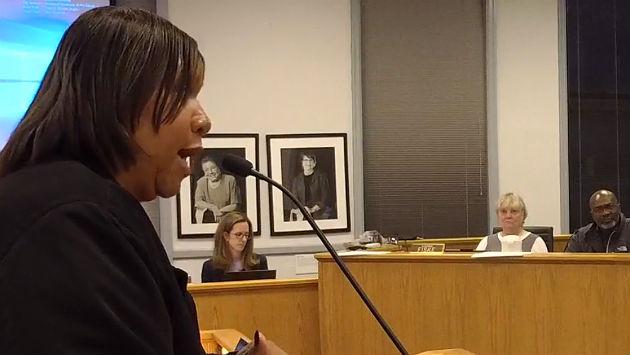 Evanston, often criticized for “drive-by diversity” — having dramatic disparities in its racial mix from one neighborhood to another — came in for criticism this week for what might be called “drive-by affordability.”

A elevation drawing of the south side of the planned 1,512 square foot home at 1729 Dodge Ave.

At last week’s Design and Project Review Committee meeting, architect DonnaLee Floeter won city staff approval of plans for what will be the sixth of the small homes in the Geometry in Construction series.

Floeter noted that many of the homes have been built on 25-foot wide lots and require zoning variations — which so far the city has always granted.

Monday night the City Council gave final approval to the sale of a city-owned lot at 1824 Emerson St. that will become the seventh in the series of houses built in part by high school students.

One reason why the Geometry in Construction homes have ended up in the 5th Ward is that the city has an inventory of vacant lots it owns there as a result of the foreclosure crisis that followed the housing market meltdown last decade.

But last month the City Council’s Planning and Development Committee rejected on a 6-1 vote plans from a private developer to construct a home on a 25-foot lot he owns at 2626 Reese Ave. in the 6th Ward in northwest Evanston.

Without the various subsidies involved in the Geometry in Construction program, developer Bill James says he couldn’t have delivered that new house as cheaply — but at a projected price between $400,000 and $500,000, he added, it would be much more affordable than most newly-constructed single-family homes in the city.

Some neighbors of the Reese site spent years fighting against the latest and previous plans for building a house there, and though the most recent plans had won approval from city staff, they were rejected by the Zoning Board of Appeals and aldermen.

James says he’s considering his options and hasn’t ruled out a possible lawsuit against the city.

The city’s Affordable Housing Plan Steering Committee is scheduled to meet at 7 p.m. this evening in Room G300 at the Civic Center.

It’s scheduled to receive a briefing from Scott Mangum, the city’s planning and zoning manager, on changes needed in the zoning code to permit new housing on smaller lots and accessory dwelling units.