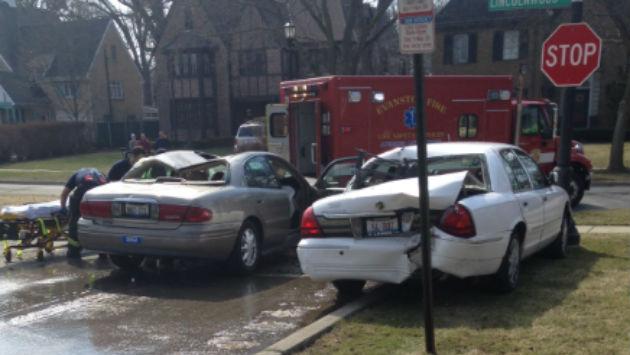 The driver of the car involved in a spectacular accident at the western end of Lincoln Street Tuesday afternoon has been charged with a number of offenses, including driving under the influence of alcohol and drugs.

Police identified the driver of the Buick that jumped the curb in the 2800 block of Lincoln, took out a street light, and dragged a parked Mercury to the end of the street at Lincolnwood Drive, as Mary J. Marasa, 65, who lives in the 1300 block of Lincoln.

Paramedics transported her to Evanston Hospital where she was admitted with serious. but non-fatal, injuries, according to Evanston police Cmdr. Jay Parrott.

Among the other charges lodged against her were two traffic offenses  and damage to city property, including the street light and parkway landscaping.

Investigators at the scene said it appeared that the light pole was transported about 400 feet down the north parkway of Lincoln, passing to the right of a parked car, and entering the street again, where the light pole pushed a parked Mercury to the stop sign at Lincolnwood, where the two vehicles came to a rest, side by side, with a portion of the street light sitting atop the trunk of the Mercury.