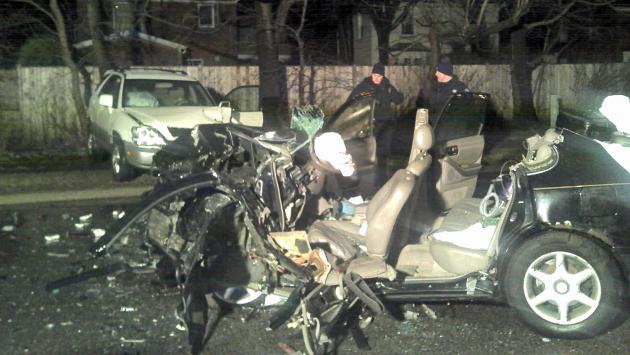 Evanston fire crews had to cut open a car to get the injured driver out after a crash at Elgin Road and Ewing Avenue shortly after 10 p.m. Wednesday night.

Evanston Fire Division Chief Tom Janetske says paramedics were able to get at the driver of one of the two cars quickly and transported that person to Evanston Hospital.

It took nearly 18 minutes for firefighters to cut the other victim free from the wreckage because of the extensive damage to his car, Janetske says.

The man, identified by the Cook County Medical Examiner's Office as Allswell Osuji, who lived in the 1000 block of West Montrose Avenue in Chicago, later died at Evanston Hospital.

No one else besides the drivers were in either of the two cars.

The accident, which occurred on the border between Skokie and Evanston, is being investigated by Skokie Police.