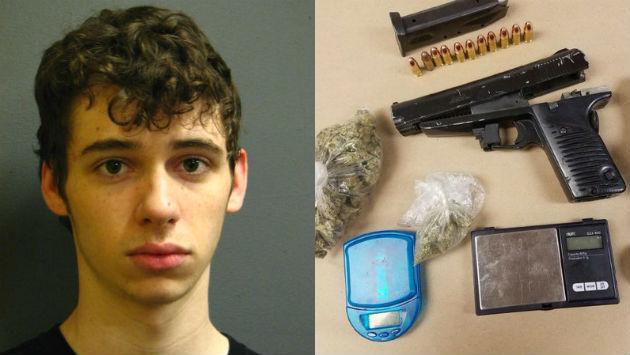 Evanston police on patrol late Sunday night noticed an occupied parked car in the 1100 block of Dewey Avenue that they say had an oddor of cannabis emanating from it.

Inside the car, Cmdr. Joseph Dugan says, was 18-year-old Jon A. Vansach, of 1132 Dewey Ave., who, police say, had not only a bag of pot on his lap but a loaded Lorcin 9mm handgun in the glove compartment, along with miscellaneous drug paraphernalia.

Earlier in the weekend, at 2:20 a.m. Saturday, Dugan says, police received an anonymous tip of a handgun hidden in the alley near Foster Street and Brown Avenue.  Patrol units checked the area and were able to recover a loaded Hopkins and Allen .32 caliber revolver in the alley of the 2000 block of Foster Street. The handgun was inventoried by the officers and will be sent to the crime laboratory for further analysis.