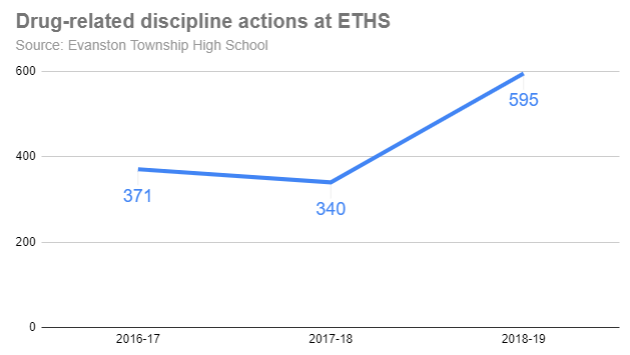 The number of discipline actions for drug offenses at Evanston Township High School last year increased substantially over the prior year, largely due to e-cigarette usage, according to a report presented to the D202 School Board Monday night.

The number of discipline incidents for drug offenses increased 75% and for unauthorized presence increased 47% from the 2017-18 school year to 2018-19.

Board member Pat Maunsell asked if the increase in unauthorized presence might be racialized, with black students being disciplined and white students simply being told to get back to class.

But the report shows that the number of unauthorized presence violations involving black male students has declined, from 233 in 2016-17 to 45 in 2018-19.

“The safety teams are being more intentional about moving kids to where they should be,” Robinson said as well as finding pockets of students on the large campus.

Board member Liz Rolewicz asked if the safety team had been trained in restorative conversations. Robinson said they had and the administration was always “looking for ways to engage stakeholders to determine what could work in our community.”

Board member Gretchen Livingston said that the discipline sub codes defiance of authority, disruptive behavior and disorderly conduct seemed too “squishy” and subjective.

Robinson said that the school’s discipline committee had removed the subjective criteria from the definition of disruptive acts, which resulted in a decline in the number of incidents from 1,800 in 2016-17 to 1,046 in 2018-19.

Robinson said the discipline committee is also refining the criteria for defiance of authority and disruptive behavior and expects to make recommendations to update the discipline code soon.

Robinson attributed the overall decrease in discipline actions over the past ten years to a change in the dress code and a commitment by the deans to take restorative action to get students who are disciplined back into the school community.

The report also shows that while the percentage of students suspended from all racial groups has declined by half over the last decade, black students are still five times more likely to be suspended than whites.

“As a black man, it saddens me to see the disproportionality of these numbers,” said Board member Jude Laude. “These young black men do not have more of a disposition to break the rules than any other children.”

He suggested that a task force be formed with parents and representatives of both ETHS and District 65, since kids can check out long before they get to high school. “It’s a community problem.”

“We know it’s challenging,” said Board President Pat Savage-Williams, “and we can see the trends and disparities.”

She commended the school’s effort to keep kids in class. “This is where they belong, even when they make mistakes,” she said.