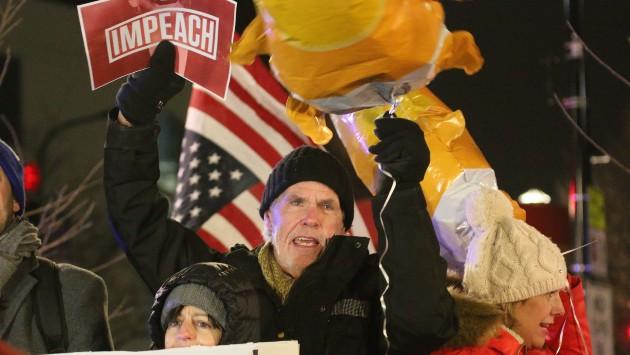 On the eve of the scheduled House of Representatives vote on impeachment, several hundred people gathered in Fountain Square in downtown Evanston this evening to support efforts to remove President Donald Trump from office.

Former state senator and Illinois gubernatorial candidate Daniel Biss of Evanston reminded the crowd of the importance of last year’s election in creating the Democratic majority in the U.S. House that will assure passage of the impeachment vote.

“If we hadn’t done the work, if the Democratic majority did not exist, this impeachment would not be happening,” Biss said.

“Elections matter,” Biss said, “and in 2020 the election will matter even more.”

“We have in our hands the power to hold this man accountable and transform this country,” he added.

“Hey hey, ho ho, Donald Trump has go to go!” the crowd chanted as they waited for the next speaker, State Sen. Laura Fine of Glenview.

“When the founders were writing about impeachment,” she said, they designed it to deal with “a president who thinks he’s above the law.”

Trump, she added, “is not putting our country first, he’s putting his bank account first.”

An overhead view of the protest crowd provided by Evanston Police.

“History will tell the story of what we did,” Fine added, “So stand up for our country, our children and our future.”

The demonstration in Evanston was one of several hundred scheduled across the country as the impeachment vote drew near.