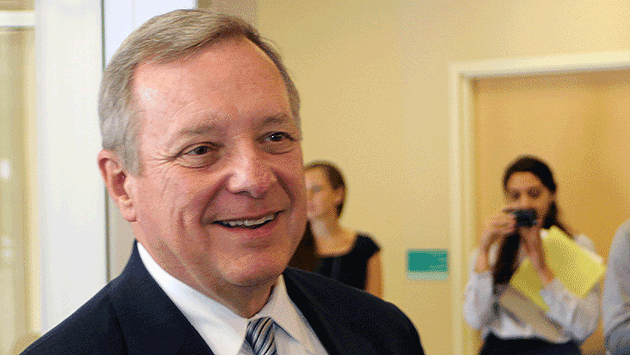 The Illinois Democrat, told 275 members of Indivisible Evanston in a virtual meeting that Biden is “the most caring and compassionate public person I’ve ever met.”

Indivisible is a liberal/progressive citizens’ organization, with groups all around the country.  It came into being in opposition to President Donald Trump.

Not only did Durbin express confidence in a Biden victory in November, but he also said chances of the Democrats re-taking the U.S. Senate are “good, and better than it’s been.”

Currently, the GOP controls the Senate, 53-47.  Durbin said the only incumbent Democrats facing truly difficult challenges are Doug Jones in Alabama, and Gary Peters in Michigan, although Peters, he said is “doing better” than he had been.

Durbin said Democrats have a legitimate shot at taking nine Senate seats currently held by Republicans, including that of Majority Leader Mitch McConnell of Kentucky, “the most unpopular politician in his state,” Durbin called him.

Durbin said it was an “outrage” that federal “secret police” have been sent to Portland, Oregon, and will apparently be sent to Chicago, at the behest of President Trump to supposedly protect Federal property.

He also said “this President scares the living hell out of me” for claiming he might not accept the results of November’s election. Peaceful transition of power is a fundamental tenet of American democracy. Durbin quoted House Majority Leader Nancy Pelosi, who said “If it takes fumigation we’ll get him out of there.”

Durbin also said a Biden victory and a Democratic Senate are necessary to change the balance of power on the Supreme Court. He urged those on the video session to “say a prayer for RBG,” Justice Ruth Bader Ginsburg, who is once again dealing with cancer. “God willing,” he said, “she’ll still be on the bench when Joe Biden is sworn in as president.”

Durbin spoke to a friendly audience, as did three staff members from the Biden campaign, who outlined strategy for the fall. This campaign will be different.  No field offices. No going door to door due to the coronavirus. Personal contacts will be virtual, or by phone.

Instead of thousands of delegates cheering at the Democratic convention in Milwaukee, there will only be about 300. One of the Biden delegates, who will likely be at a remote location instead of in Wisconsin, is Jill Wine-Banks of Evanston.

Wine-Banks, a former Watergate prosecutor and current legal analyst for MSNBC, told the Indivisible members that this year will see a “convention across America,” with virtual events to watch Joe Biden and whomever he picks for his running mate.

The traditional startup to election season used to be Labor Day, with picnics, parades, and speeches. But now, because of the coronavirus and thanks to social media, campaigns seem to be Zooming into activists’ homes almost every night. And those activists will soon be coming to a computer or telephone near you. The election is 100 days from Sunday.