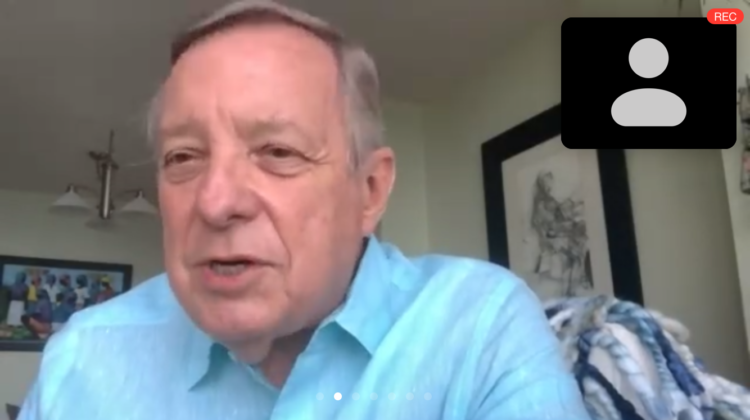 Sen. Dick Durbin told Evanston Democrats tonight that he “worries about the peaceful transition of power in this country.” Speaking to a virtual meeting of the local Democratic Party, the state’s U.S. senior senator was reacting to President Trump’s suggestion to delay the election.

But Durbin also said he is concerned that the president is serious, and is laying the groundwork now in case he loses on Nov. 3. The president also suggested before the 2016 election he might challenge the results, but he won.

“Let’s assume the worst case scenario and he refuses to concede,” Durbin said. Then, he explained, there are two backstops. First is the Supreme Court. Durbin said he “has his fingers crossed” that Chief Justice John Roberts is a “constitutionalist or an institutionalist” and would lead the court to uphold the election results. The president has no constitutional authority to delay an election.

The second backstop, Durbin said, is the military, which should be “loyal to the constitution rather than to this individual.”

He said this election will be different because of the coronavirus pandemic. The senator said as a politician, his “impulse is to wade into every crowd and shake every hand in sight.” Now, because of the threat of COVID-19, Durbin said he doubted there would be any face-to-face campaigning. Rather, both parties will use virtual events, social media, broadcast, and mail to reach voters.

Durbin also blasted the Republican-controlled U.S. Senate for not yet coming up with a coronavirus relief package when the CARES act $600 weekly benefit for unemployed Americans runs out tomorrow.

The Democratic-controlled House passed a $3 trillion package ten weeks ago, but Durbin said, “The Republicans are so out of touch” that they are not even close to that amount.

Durbin said the two parties will have to come up with unemployment assistance legislation as soon as possible, because “we can’t leave 30 million people without getting their benefits.”

The senator said his preference for the Democratic vice presidential nomination is his Illinois colleague, Sen. Tammy Duckworth. Durbin said, however, he has no inside knowledge on who the presumptive presidential candidate, former Vice President Joe Biden, will pick.

However the ticket shapes up, Durbin told his fellow Democrats to do everything they can to get out the vote. “If you don’t think getting rid of this president is the most important vote you’ll ever cast,” he said, “then you’re just not paying attention”