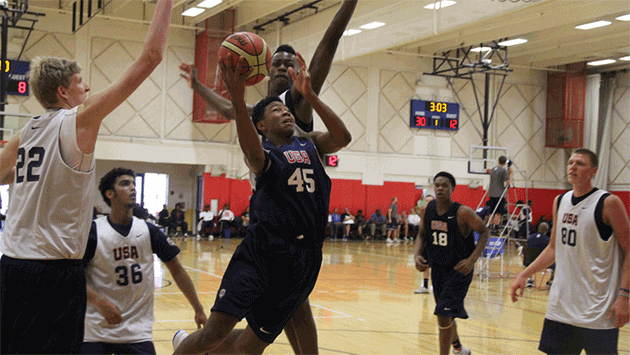 There was a recurring theme at the USA Developmental National Team Mini-Camp in Colorado Springs last month — even the top players in his age group nationally couldn’t keep Evanston’s Nojel Eastern from getting to the basket.

One of the few freshmen in school history to earn a varsity starting spot for the Wildkits, Eastern returns as the Kits’ leader even after missing half of last season with a knee injury.

Coach Mike Ellis’ squad opens Monday at the DePaul Prep/Lane Tech expanded Thanksgiving tournament — now called “The Battle of the Bridge” — at 6 p.m. against Westinghouse. They’ll play host DePaul Prep (formerly known as Gordon Tech) on Tuesday at 8 p.m., and will match up with Taft on Wednesday at 8. The tourney will conclude with a crossover game on Friday.

Evanston will also participate in two shootout events new to the school’s schedule, the invitations coming because Eastern is regarded as one of the top sophomores in the state of Illinois.

The 6-foot-4 southpaw was Evanston’s leading scorer through the Pekin Christmas tourney last year before being sidelined with a bruised knee. He was out until the season finale, a sectional loss to Maine South in overtime, and came back to score 17 points in 25 minutes as the Kits concluded a 21-9 season.

He has shown no lingering effects since then and could emerge as one of the top players ever at a tradition-rich school like ETHS.

Eastern and 6-foot-5 senior Elijah Henry, a 3-year starter, are the only regulars returning for an otherwise young squad, although junior Micquel Roseman also started about half a dozen games in the backcourt last year.

Ellis said prior to the start of the season that Eastern has already received Division I recruiting scholarship offers from the University of Illinois, Bradley, Purdue and Nevada-Las Vegas, and every single Big Ten school has interest in adding him to their rosters.

That’s for the distant future. For the immediate future, the Wildkits’ success will depend on a combination of the progress made by Eastern and his teammates when it comes to developing team chemistry.

“We’ll have a lot of guys who haven’t played against varsity competition yet, and they’ll have to adjust to the pace of the varsity game,” Ellis cautioned. “At the same time this is a very deep team. We’re a little undersized overall, but there are days at practice where our 10th player is as good as our best player.

“The injury Nojel has last year is basically a non-issue now. It was basically a bruise on his kneecap that just needed time to heal. He hasn’t had a problem with it since then.

“Nojel can take the ball wherever he wants to on the floor, and that ability to penetrate will definitely help the others. And with his unselfishness, and the fact that he’s such a skilled passer, he’s more than willing to be a pass-first guy. The sky’s the limit for him as far as his potential is concerned. He continues to work so hard, and he has the right attitude, the drive to get better. He’s also really taken a step forward when it comes to leadership. We couldn’t expect that from him as a freshman, but now he’s taken leaps and bounds in that area. The kids really respond to him because they know he wants to do things the right way.”

Henry has played the past two seasons on guard-oriented squads but still averaged 10 points and 7 rebounds while achieving all-conference recognition as a junior.

“We’re looking for a big season from Elijah,” the coach said. “You can always guarantee double-double production from him because no one plays harder. He sets the tone for us with his effort.

“He worked hard on his perimeter game in the off-season (after shooting 54 percent from the field last year, mostly from close range) because for him to get to the next level, he needed to develop some options outside.”

Henry is also being counted on to provide leadership, considering there are only four other seniors on the roster — guards Xhavier Hilliard, Tommy Haughey, Alante Massie and Henry Woo — who saw almost no court time last year.

Two freshmen could also contribute sooner rather than later. Matt Hall lends size underneath at 6-6 and Drevon Clayborn is a 5-10 guard with great bloodlines, the younger brother of two former stars in the ETHS girls basketball program, twins Sierra and Seara.

“The freshmen played with us in the summer and they’re doing a great job,” Ellis praised. “If they push hard enough, they could get some varsity minutes. They are two kids who just won’t settle. They come into practice every day wanting to get better.”

As in the past, Ellis isn’t concerned with establishing a set starting lineup.

“There are days when some guys look like bona-fide starters for us, and other days where they’re getting beat out,” said the Wildkit boss. “That’s why we keep stats in practice. If you rank as one of our most productive players, you’ll be a starter. We’ll take it game by game, practice by practice, week by week. We plan on playing a lot of guys with a lot of different lineups.

“I think one of our strengths is that even with Nojel, we won’t be a team where the other team can say we have to stop that one guy. He’ll find the other guys if they double team him. Our balance is a strength we’ll need to play to. “

Evanston plays in the Team Rose Shootout at Morton College next Sunday at 3:15 p.m. versus Crete-Monee, and will also participate at the “When Sides Collide” event at Glenbard East High School against Riverside-Brookfield on January 24th.

Also on the slate is the annual “War on the Shore” appearance at Loyola Academy, where a February 7th matchup against Fremd is on tap.