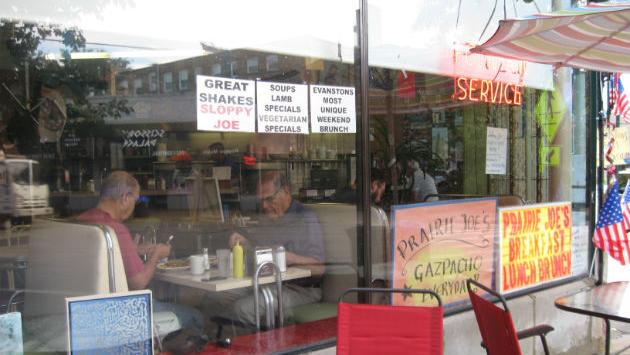 Prairie Joe’s restaurant on Central Street this week is celebrating its 25th year in Evanston, where you can not only enjoy a delicious brunch, but you can also buy one of owner Aydin Dincer’s original paintings.

The restaurant, at the corner of Central Street and Prairie Avenue, is a favorite for local residents who prefer something different for brunch on weekends, for the menus include not only American standards such as eggs, ham, and grits, served with biscuits and gravy, but also Mexican specialties like huevos rancheros, and Mediterranean favorites like an egg, pasta, feta, tomato, and black olive skillet.

But what really sets Prairie Joe’s apart from other dining houses are the paintings by Dincer that grace the walls and are available for purchase.

“Being acknowledged as a painter is a nice feeling,” says Dincer. And for his customers, “they want to know what I’m doing.”

He’s done about 300 to 400 paintings, mostly landscapes, and he does his painting at home after the restaurant closes each day at 2:30 p.m.

Dincer’s interest in cooking began in his 20s when he was looking for work.

“When I walked into a restaurant in Chicago, just looking for a job,” he said, “my life changed.” He found that he had a passion for cooking, which has stayed with him all his life.

The restaurant on Central Street, called Jordan’s, was a local snack shop. Dincer had tired of “fine dining,” but he still wanted to cook. So he bought it, and Prairie Joe’s was born.

He added salads and soups to the menu, and for breakfast, he introduced some Mexican favorites, as that was becoming quite popular.

When he started Prairie Joe’s in 1991, Central Street had a stationery store, a hardware store, and a stereo store.  As the merchants grew older, they retired and left, he said.

But then younger people began moving into the area “and a new generation of businesses started to move in,” he recalled.  A spice store. An olive oil store.  New restaurants like Bluestone and Ten Mile High, along with Starbucks.

As the area changed, so did his menu. Dincer changes his specials on a regular basis.

One of his customers, in his late 70s, was there this week with two of his male friends. The customer said, “This is where I hang out on Thursdays.”

When asked if he had any children, Dincer pointed to a young man and a young lady and said they were his son and daughter. His wife does the books, he added. Two other employees help with the cooking and the dishwashing. In all, the restaurant employs four persons full-time.

Even though he’s located just a half-block from the Central Street Metra station, Dincer says that commuters are a small part of his clientele, as “they walk by in a hurry to catch their train.”

While he’s about a mile from the Northwestern University campus, college students are not a major part of his business either, Dincer said, “but on football days, I get a lot of business from the fans on the way to the game,” as Ryan Field is just a couple of blocks east on Central Street.

But the people who walk in and call him by name are, by and large, local residents, many of whom have permanently written “Brunch at Prairie Joe’s” onto their weekend calendar.