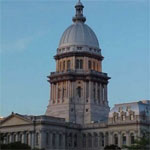 SPRINGFIELD — The sponsor of a bill allowing people to record police officers in public is trying to stall the measure, First Amendment advocates say.

SPRINGFIELD — The sponsor of a bill allowing people to record police officers in public is trying to stall the measure, First Amendment advocates say.

The sponsor of Senate Bill 1808, Sen. Michael Noland, D-Elgin, isn't letting it stand for a vote, without changes.

Tuesday, the Illinois House voted to change the state's eavesdropping law to allow civilians to make audio recordings of police officers in public, as every other state in the country permits. In Illinois, recording officers in public, whether accompanied by film or just on a sound recorder, is punishable by up to 15 years in prison.

Noland told Illinois Statehouse News he's not stalling the bill, but he wants to "reconcile" the move with recent court rulings that deem the law unconstitutional, and add additional provisions to allow police to record civilians.

Josh Sharp is government relations director for the Illinois Press Association, a media and First Amendment group. He says courts are all but asking the General Assembly to address the issue. Three courts have found the law unconstitutional, but prosecutors can still try to enforce the current law, Sharp said, leaving it in limbo.

"There's no reconciliation needed. The courts have said you cannot criminalize activity protected by the First Amendment," Sharp said. "We're just looking for an up or down vote on the bill as it passed the House."

Noland said he thinks the bill could pass before the end of the legislative session next week.
"I'm for everybody videotaping as long as it's not a an invasion of privacy," he said.