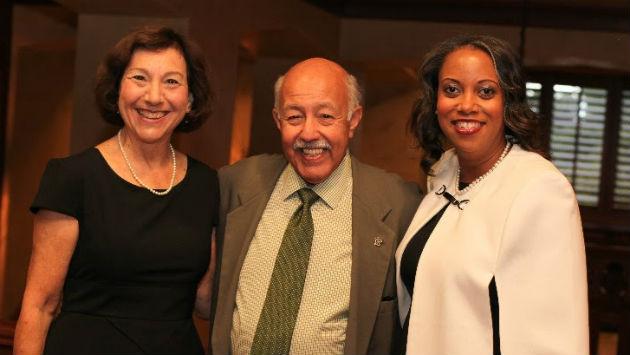 Co-chairs Judy Kemp and Gene Servillo announced to the sold-out crowd that the evening made ECF history by selling the most tickets and by securing the greatest number of sponsors of any event in ECF history.  “The funds raised tonight support the broad spectrum of work ECF does across all of Evanston,” Kemp said.

President and CEO Monique B. Jones told the crowd, “I want you to walk away knowing that ECF is Evanston’s greatest cheerleader.  Not one group, neighborhood, or issue, but all of Evanston.  We stand ready to be a thought partner, a leader when we should be, a collaborator, an investor, a facilitator – and most of all – a convener to grow our impact.”

Broadcasters and Evanstonians, Karen Jordan of ABC7 Chicago and Christian Farr of NBC Chicago, emceed the event together for the second year in a row, which had as its theme “Our Next 30 Years.”

The Northwestern Dance Marathon (NUDM) Executive Board volunteered for the evening, facilitating the auctions and checkout as well as participating in the evening's musical revue. NUDM has donated more than $1 million to ECF since 1998, in addition to giving countless hours of volunteer time to Evanston.