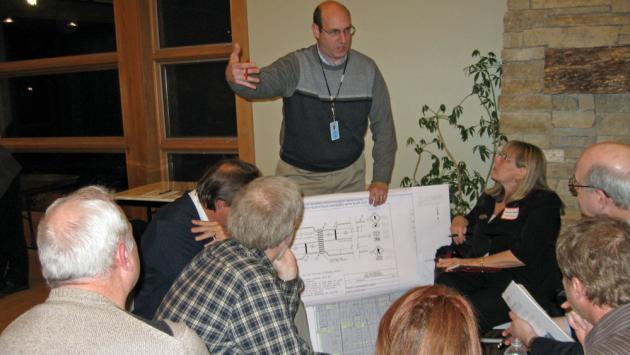 More than 50 North Evanston residents met at the Ecology Center Thursday night to brainstorm ideas for what the city’s Master Plan refers to as the “eclectic, funky, European village small-town character” of the Central Street neighborhood.

More than 50 North Evanston residents met at the Ecology Center Thursday night to brainstorm ideas for what the city’s Master Plan refers to as the “eclectic, funky, European village small-town character” of the Central Street neighborhood.

The occasion was a forum on “The Future of Central Street,” sponsored by the Central Street Neighbors Association and attended by aldermen Mark Tendam, 6th Ward, and Jane Grover, 7th Ward, as well as a host of city staff, headed by Director of Economic Development Steve Griffin.

Both aldermen, whose wards include portions of the street that was once the principal business district of the Village of North Evanston before it was annexed to the City of Evanston many decades ago, painted an upbeat picture of the street’s future prospects, echoed by Griffin’s observation that the business climate “is just beginning to turn” in Central Street’s favor.

There were murmurs of approval when Ald. Grover announced there are plans to hold a weekly farmers market at Independence Park on Wednesdays from 4 to 7 p.m., beginning June 1.

In a document announcing the forum, CSNA said that “everyone would like to see something besides vacant land on the former Evanston Theaters site; the shuttered Citgo station is not helping itself or anyone else; the Domicile block remains underutilized; and one of the only ‘activity generators’ identified by planners, namely the North Branch of the library, has come under assault by the city.”

In that atmosphere the CSNA was asking residents to come to the forum to help “identify needs and priorities.”

To that end, the attendees broke into four small discussion groups, each moderated by a CSNA board member, to offer ideas for future development of the street, anchored by two hot dog stands– a former Hot Dog Island at the west end and Mustard’s Last Stand adjacent to Northwestern University’s Ryan Field.

Many of the ideas involved substituting something else for what is already there and is held in private hands. For example, one participant expressed a desire to see a Trader Joe’s grocery store on the site presently occupied by a CVS Pharmacy at Central and Crawford. “Is CVS planning to leave?” asked another member of the group. “No,” was the moderator’s prompt response.

Similarly, there was a proposal to turn the former Hot Dog Island site into a gateway structure to Evanston, but there was no evidence that the owners of that property were in any hurry to sell.

A synthesis of the ideas proposed is to be published on the group’s website.