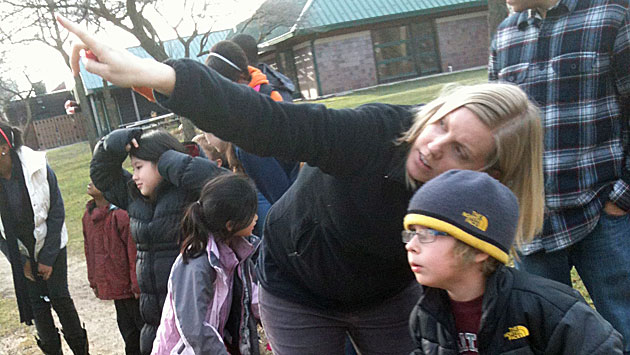 The Evanston Ecology Center is offering a series of sessions this winter on nature subjects for children. Here's a look at one of them.

“I see it! I see it!” the children called out in excitement, peering up at the bird nests that are visible through the bare tree branches.

On this atypically mild January day, they paused along the path of Evanston’s Ladd Arboretum to study what the birds built.

The youngsters were participating in the Evanston Ecology Center’s EcoFreeze Winter Break Mini-Camp — one of several opportunities the center is providing this winter to promote children’s awareness of nature.

The Evanston Ecology Center is a member organization of the Chicago Wilderness Leave No Child Inside Initiative, which seeks to “re-connect children and families with nature and the outdoors,” said initiative coordinator Emilian Geczi, 33.

Environmental educator Claire Alden, 27, said more children and new participants came to the nature-themed day camp this year than any of the previous years she has worked at the ecology center.

“They can feel freer and the play is more imaginative,” said Fowler, 48, who studies nursing at the University of Illinois at Chicago.

During the first week, which focused on animals that hibernate, they constructed an animal shelter in the Ladd Arboretum, she said.

The second week highlighted animals that migrate, and the children learned about bird flight and how to identify the appearance and calls of bird that do not migrate. They also visited the Grady Bird Sanctuary in the Ladd Arboretum.

Chris Day, 38, said the camp educated his son Sam Day, 7, about science and nature. “For him to be able to go to a camp that does that, that’s something that we value as a family,” said Day, an Evanston resident and graduate student at Northwestern University.

Although Evanston’s more urban setting prevents Sam Day from experiencing true forests and a real detachment from urban life, Chris Day said, the camp allowed him to better come into contact with the outdoors.

For Louis Fowler Gottlieb, outdoor time brings him interaction with other children, Brenda Fowler said.
“It’s, I think, easier for him to connect socially with kids who are running around playing some kind of active game,” Fowler said.

Children are looking to TV, video games, and other activities rather than spending time outdoors, Geczi said.

In a study published in 2004 that had surveyed 830 U.S. mothers, 85 percent of the mothers indicated that television and computer game use was the top reason for a shortage of outdoor play, according to the study, “An Investigation of Outdoor Play.”

Eighty-two percent of the mothers reported that crime and safety were worries that hindered their children from playing outdoors too.

“I think it’s more of a change in mindset that we’re promoting to just kind of take the time and maybe not rush from one spot to another when you’re outside,” he said.

Next week, on Friday, Jan. 20, the ecology center will offer an “Evening Ecology” session about snowflakes, open to children ages 2 and older.

To support the Leave No Child Inside Initiative, the center is also providing a Jan. 21 session where children will create their own snowshoes, and on Feb. 18, they will create bird feeders.

“Presidents & Nature,” on Presidents Day, Feb. 20, will feature games, crafts, animals and indoor and outdoor activity for children in kindergarten through fifth grade.

Reporter Katherine Dempsey is a journalism student at Northwestern University.