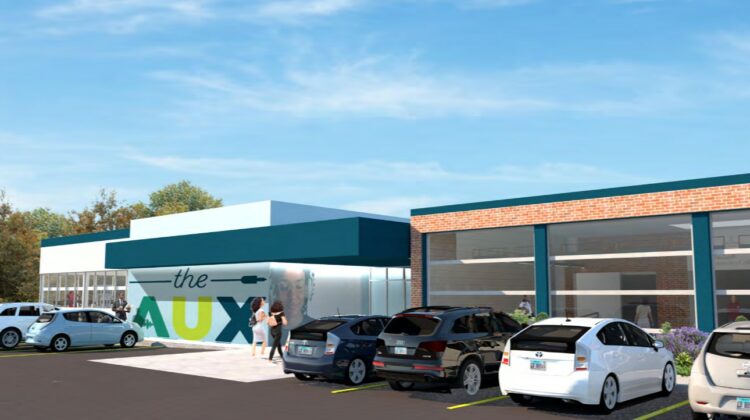 A rendering of the former EZ Spuds building redeveloped as The Aux.

A non-profit called The Growing Season is developing the project and is seeking $3.3 million in philanthropic support, $2 million in equity from local investors and $2 million in public funds.

The proposed public funds are split between $1 million from the city and another $1 million being sought from Cook County’s ARPA funding allocation.

Once renovated, the 16,500 square foot building that formerly housed EZ Spuds would be turned over to the private equity investors. It is projected to have a market value at that time of $2 million, or about $121 per square foot.

A city staff memo says the project is expected to provide high-quality commercial space for a collective of Black-owned businesses and organizations that support holistic health.

The EDC also voted Wednesday night to recommend City Council approval of a request that The Aux be granted a Class 7B property tax incentive that would cut taxes to 40% of their normal level for the first three years and gradually increase it to the normal level by the fifth year of operation.

So far The Growing Season says it has raised $1.1 million in philanthropic backing for the project, with the largest contribution, $500,000, coming from the group’s founder, Lori Laser, the wife of the Ross Laser, founder of the Evanston-based Magnetar Capital hedge fund.

The group has already received zoning approval for the project, and, assuming the funding comes through, hopes to be able to open The Aux by late next year.