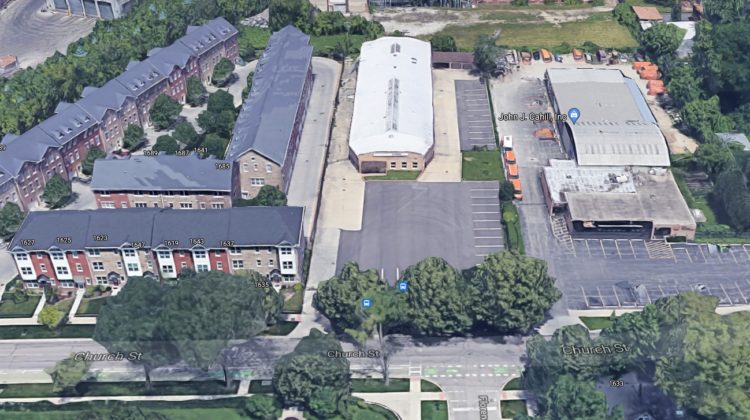 The building at 1611 Church St. is located between the Church Street Village townhomes and the Cahill Plumbing offices. (Google Maps)

The project would use up to $7 million in state Private Activity Bonds. The state allocates $8 million in such bonds to the city for industrial development each year.

Economic Development Manager Paul Zalmezak says the city has not identified any projects that would qualify to use the bonds for many years and so the city has been unable to make use of them.

The project, as proposed, would also use $325,000 in tax increment financing funds from the West Evanston TIF District. After objections raised by Ald. Devon Reid (8th) the committee voted to take no action on a recommendation regarding those funds.

The proposal comes from Whole & Free Foods LLC., which produces a line of allergy-free snack foods under the Every Body Eat brand. Co-founders Trish Thomas and Nichole Wilson launched their initial production from a former restaurant on Davis Street downtown, but have since moved production to a factory in Chicago as demand for their products increased.

Thomas, an Evanston resident, told the committee she hopes to further expand production by acquiring the Church street property and building a new factory on the site that would expand the firm’s ability to hire Evanston residents.

Wilson said the firm starts production line workers at $14 an hour, with the opportunity to increase pay to as much as $21 an hour within 18 months.

Thomas said the company now has 36 employees and anticipates expanding to have at least 60 jobs within the next two to three years.

The 1611 Church St. property has been on the market several times over the past decade and currently serves as a warehouse for Blue Butterfly Miniatures. The nearly one-acre lot is currently listed for $1.65 million,

The property will also require rezoning to be redeveloped for factory use.

More details about the proposal are in the Economic Development Committee meeting packet.