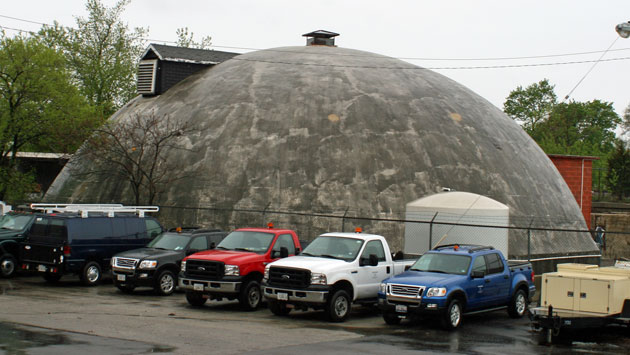 Evanston aldermen should send city staff back to the drawing board to come up with a better proposal for a new city salt storage facility.

It a time of financial strain like the present, the city needs a solution that is more cost-effective.

It should investigate cost-sharing solutions with neighboring communities.

And it needs to find a solution that won't blight residential neighborhoods or take away park land.

An approach used by Des Moines, Iowa, and surrounding communities reported in the American Public Works Association Reporter offers a possible model. Here are some highlights:

What towns might Evanston collaborate with on a joint solution? Well, at least as of a year-and-a-half-ago, when this story appeared, Skokie had a salt dome the same size as Evanston's that appeared to be of roughly the same age as Evanston's two-decade-old dome.

If we really need more salt storage capacity and a replacement storage building, perhaps Skokie does as well.

Back in 2008, the city incurred substantial additional costs to buy salt after a snowy winter caused usage to double from average levels.

But as this story from APWA Reporter suggests, collaboration with neighboring towns and use of backup storage sites can help cope with such issues. And, as NPR reports, there now may even be ways to use the futures markets to hedge against spikes in snow-related costs.