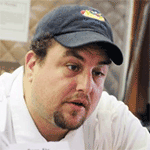 Edzo's Burger Shop in Evanston, which has frustrated its fans for years by not being open for dinner, has decided to finally give them what they want.

Owner Eddie Lakin tells the Chicago Reader that now that he's opened a second outpost in Lincoln Park and staffed up so that he doesn't have to do everything himself any more, it's time to keep the doors open in Evanston until 10 p.m., starting next Tuesday.

Lakin's original model of only being open from 10:30 a.m. to 4 p.m. was driven, he says, by his desire to be able to have a life — and be home with his kids in the evening.