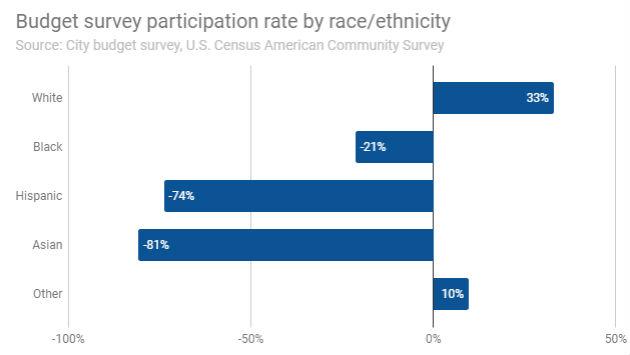 Evanston’s equity coordinator, Pat Efiom, told residents at a 2nd and 5th Ward meeting Thursday that the city needs to do more to engage minority communities in the city’s decisionmaking processes.

She cited low participation rates by minorities in answering the city’s recently completed survey on budget priorities as evidence of a more general problem of “institutional mistrust” among many individuals in those communities.

The chart above compares the number of people who self-identified as members of each racial or ethnic group who completed the budget survey with the share of Evanston’s population for that group as reported by the latest U.S. Census Bureau American Community Survey.

It shows that whites were one-third more likely to respond to the survey than would be predicted by their share of the population, while the under-participation rates ranged from 21 percent for blacks and 74 percent for Hispanics to 81 percent for Asians.

Other measures of engagement in the political process also show under-represenation by minority groups. The Census Bureau, for example, reports that voter turnout in presidential elections has been lower for minority groups than whites over the past three decades, except for 2012 when turnout rates for blacks slightly exceeded that for whites.

Efiom says that she and other city staff members will be making “a pointed and direct effort to reach the black and Latino communities” in coming months to try to build engagement around the budget and other issues.

Most residents completed the city survey online. Efiom says that knowing that computers are less available in minority communities, city staff provided paper copies of the survey at various locations, but heard back from some people that they didn’t trust that their data would be accurately entered by whoever collected the forms.

“So institutional mistrust is high,” Efiom said. “Communities of color have historically been frustrated. It’s a long term commitment we have to make to engage them.”