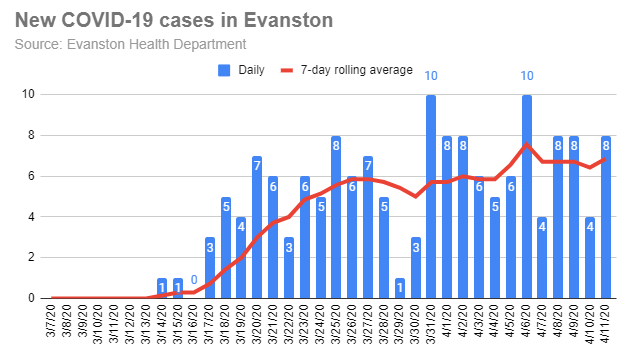 Amid signs that the growth in COVID-19 cases may be leveling off, Evanston reported eight new cases today, raising the total here to 156, and the statewide count rose by 1,293 to a total of 19,180.

The rolling average of new cases in the state now has been close to flat for three days and for Evanston it’s been relatively flat for five days.

But state officials continue to caution that it’s too early to say that the pandemic here is under control and that even if the count of new cases starts to trend down, it will still be too soon to ease social distancing restrictions,

Until at least most of those capabilities are in place, the governor suggested, many social distancing restrictions will need to remain in place, lest the state suffer a resurgence of the disease outbreak that could be even worse than the current one.

The governor and Illinois Public Health Director Dr. Ngozi Ezike also strongly cautioned people to resist the urge to attend church services or gather with family members tomorrow on Easter Sunday. Instead, they said, people should stay and home and visit virtually — with video or telephone connections.