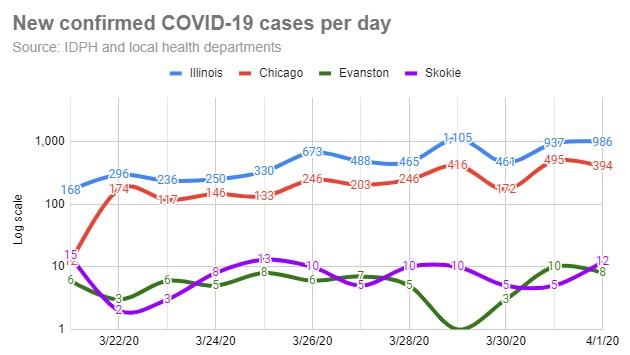 Evanston recorded eight new confirmed cases of COVID-19 today for a total of 89, while the statewide count rose by 986 to a total of 6,980.

The state reported 42 additional deaths today for a total of 141. Seventeen of those deaths were in Chicago, bringing Chicago’s total to 39.

There was one new death reported in Skokie, for a total of 5. Evanston’s death toll remained at one.

At his news conference this afternoon Gov. J.B. Pritzker urged residents to take 10 minutes while they’re staying at home to reduced their risk of exposure to the disease to fill out their U.S. Census form — stressing that having everybody counted will be critical to ensuring that the state and local communities here get a full share of federal tax money to be distributed to states and localities over the next decade.

He also said the Trump administration should open a special enrollment period for Affordable Care Act coverage. It would be “leadership malpractice” not to do so, he said.

He also noted that people who have been laid off from their jobs are eligible to enroll for coverage now because a layoff is a “qualifying life event” that provides immediate eligibility for enrollment.