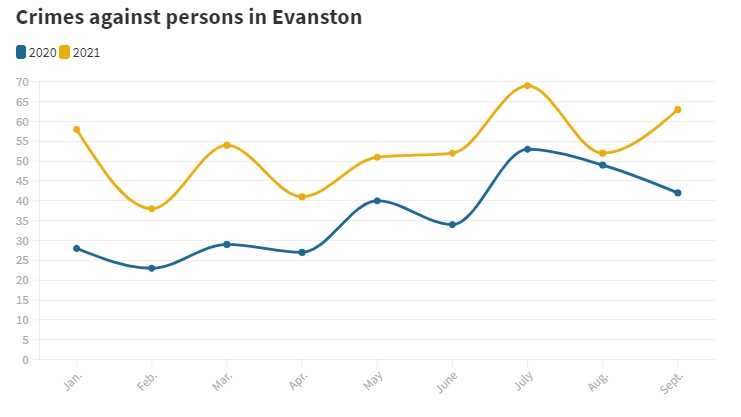 Evanston’s proposed 2022 city budget calls for filling eight Police Department jobs left vacant this year, but does not restore 16 other positions sliced from the department’s 2021 budget — although just-released data shows violent crime has increase 47% so far this year compared to the same period last year.

(The chart above shows total authorized staffing levels each year, including positions ordered to be held vacant.)

The budget, released by the city manager’s office late Monday afternoon, calls for an overall increase of authorized city staffing from 795 to 808 full-time equivalent employees, but none of those increases would occur in the Police Department, where authorized staffing would remain unchanged at 207 — both sworn officers and civilian employees, including those who work in the 911 dispatch center.

Monthly crime statistics, released Monday afternoon by the Police Department after Evanston Now reported Monday morning that the data had not been disclosed all year, show that crimes against persons as recorded using the FBI’s new National Incident-Based Reporting System have increased 47% this year, while crimes against property declined by 2%

The new NIBRS crime data is not necessarily comparable to figures for 2019 and earlier that were compiled using the now-obsolete Uniform Crime Reporting system.