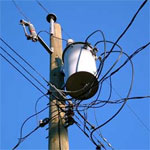 However the staff report cautions that electricity pricing is volatile and because of potential changes the state's definition of small commercial customers that can be included in the city program the pool of eligible businesses may shrink, which could result in substantially higher prices when the final bids are received.

The average residential customer in the city now pays ComEd an average of $58 a month for electricty, plus additional fees for delivering the power to the home and taxes. The average customer uses about 750 kilowatt hours of electricity a month.

The City Council this evening is scheduled to approve a plan to go ahead with implementing the electric aggregation program.

If the council votes to approve the plan tonight the city will hold public hearings early next month and then seek binding bids from the alternative suppliers later in April. If the process from there moves forward as expected, Evanstonians could start receive power at the newly negotiated rates by July.