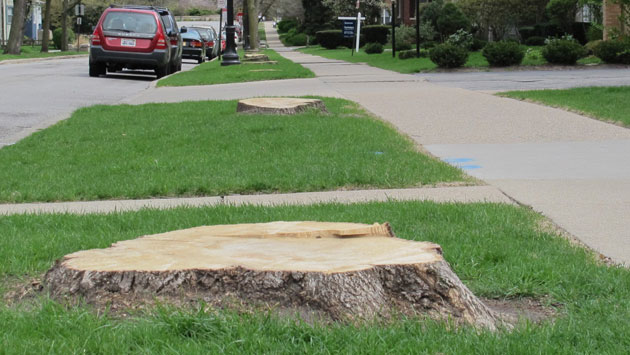 Following the mild winter and unseasonably early spring weather, the Emerald Ash Borer has been spreading at a rapid pace, leading to the removal of a large number of Evanston's parkway trees.

Following the mild winter and unseasonably early spring weather, the Emerald Ash Borer has been spreading at a rapid pace, leading to the removal of a large number of Evanston's parkway trees.

Since 2006 with the state agriculture department confirmed that the borer was present in the far northern edge of Evanston, the insect has spread to nearly every corner of the city.

Ash trees were widely planted across northeast Illinois because they were fairly inexpensive and generally quite tolerant of soils and climate in this area. So by the time the infestation broke out, they amounted to about about 12 percent of the city's parkway trees.

But making the impact more dramatic, in the early 1970s the city implemented a master tree planting plan  that called for planting a single tree species on each city block..

As a result those blocks designated to be planted with only ash trees are now being stripped of all, or nearly nearly all their parkway trees.

While efforts continue to be efforts to find a control measure to stop the spread of the invasive insect, nothing has yet proven to be effective enough for the city to consider widespread use.

The Forestry Division's only real option now is to quickly remove any ash trees that forestry staff has confirmed as infested. As a result, the number of parkway ash trees removed over the past year, nearly 500, has outpaced the funds available to replace them. Staff anticipates that this insect will continue to spread at a rapid pace.

In some cases, when the infestation is not severe, the Forestry Division has allowed residents to treat their ash trees on the parkway. It requires their contractor to use Tree-Age, which cannot be applied by a homeowner because it is a restricted use product, and to get a permit to do so.

Forestry Division staff will inspect the Ash to be sure it is a good candidate for injection, and then issue the permit.

The forestry staff plans to replace one-third of the removed trees either this spring or fall, and then continue replacing one-third in 2013 and 2014.

A reforestation fund was established in 2011 following a series of severe storms that destroyed many of Evanston's public trees.

Donations to this fund will be used to more quickly replace Evanston's urban forest. Donation forms are available  online.