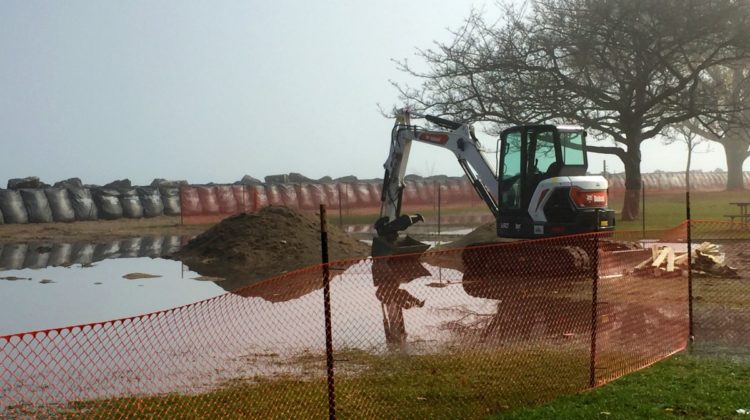 Flood and erosion control work along Evanston’s Lake Michigan beaches should be completed next month, but experts say that work is only a stopgap, and much more is needed.

Historically high lake levels combined with pounding waves have been chipping away at the rock barriers, known as revetments. If the rocks keep disintegrating, “We’re going to lose our parks. It’s not a good situation,” says Stephanie Levine, who is in charge of the repair project for the city’s Public Works Agency.

Work began in late September, and has seen some permanent improvements, but mostly temporary installation of sandbags along the lakefront revetments in Elliot Park, Garden Park and the Greenwood and Dempster Street beaches.

Part of the project is to stabilize the disintegrating rocks, Levine says. If people climb up, “the rocks could fall on them,” she adds.

However, adding new rocks is extremely expensive, so the short-term sandbag fix is all the city can afford right now. The lakefront repairs were not originally in this year’s budget, but the situation was so critical, Levine says, that City Council ok’d $750,000 to get the current work done along a mile to a mile-and-a-half of lakefront shoreline.

If lake levels go down and stay down, Levine says the sandbags might be removed. However, the problem could return as soon as the lake goes back up.

Plus, the shoreline along Sheridan Road, Levine says, has “not even been touched yet” with even a temporary fix, so that means even more money is needed. Levine adds the total price tag a permanent fix along the entire lakefront would be “many millions of dollars.”

There is, however, no funding for lakefront repairs in the City’s 2021 budget. Levine says the City may try to get a grant so a long-term fix to the shoreline can be done. For now, however, beachgoers should expect to see some sandbags in the background of their “here-I-am-at-the-lake” photos.