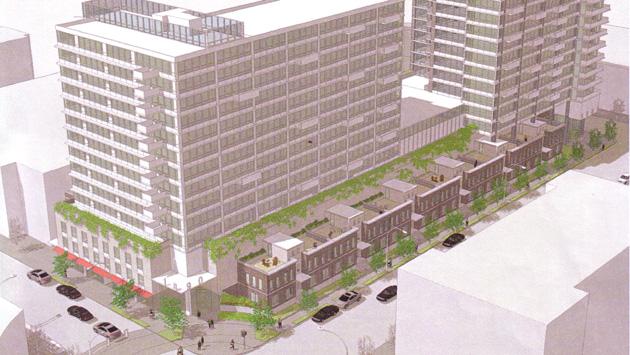 Opponents of two high-rise towers on Emerson Street failed Monday to slow review of the revived projects by sending them back to the Plan Commission.

The City Council's Planning and Development Committee instead voted to schedule its own review of the plans from Carroll Properties and the Fifield Companies for the committee's Jan. 14 meeting.

But Alderman Ann Rainey, 8th Ward, said the detour could add six months to the review process for the $106 million project and could end up killing it.

While the city's zoning code provides an option for review by the Plan Commission of revisions to planned development proposals, no recent project has been sent on that path. In eight cases in recent years the City Council has opted to review changes to project plans itself instead.

The city's law department presented a memo to aldermen indicating the return trip to the Plan Commission was not required, because the City Council retains final oversight over any project once it's approved.

Wynne argued that the changes in the plans for the buildings at 1881 Oak Ave. and 1890 Maple Ave. appeared to be more substantial than those in other projects that the council has approved before.

But David Reifman, an attorney for the developers, said the new design for the buildings is smaller and shorter than what was originally approved.

Two residents of the Optima Views condo tower two blocks south of Emerson were among a handful of neighbors objecting to the revived project. Optima Views had been a hotbed of opposition to the original plans for the developments on Emerson, which initially were approved in 2006 and 2009.

The Emerson development would restrict views to the north from some units on lower floors of the Optima Views building.

Aldermen Don Wilson, 4th Ward, and Delores Holmes, 5th Ward, joined Rainey to defeat, on a 3-2 vote, the plan to send the project back to the Plan Commission.

Top: A rendering of the new design for the project, looking southwest from the corner of Maple Avenue and Emerson Street.