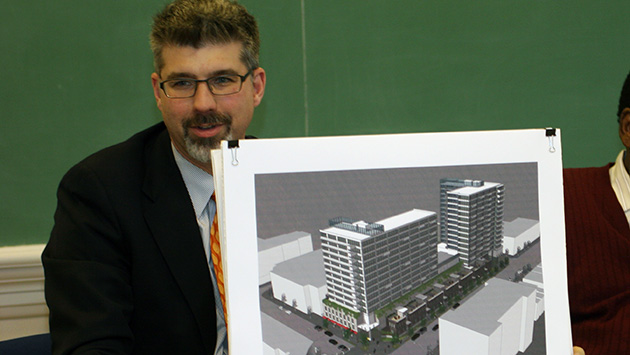 At a Site Plan and Appearance Review Committee meeting Wednesday the development team answered questions about the project from Cindy Smith, president of the nearby Optima Views condominium association.

Smith said the 200 families living in Optima Views, at 1720 Maple Ave., will be looking at the back of the new building.

"I'm concerned about the color and glare from the back of the building" which will be in the sun all day," Smith said.

Alan Schachtman, of developer Fifield Companies, said the glass to be be used in the towers is not reflective. "It has a blue-green tint with a high-efficiency Low-E coating that will create no reflections. "If you're worried about glare, I can assure you that there won't be any," Schactman said.

He added that the coating on the concrete base of the building housing the parking structure would have a textured and matte finish to reduce reflections.

In addition, he said, the base of the new building will be about 40 feet tall, close in height to the office buildings immediately south of it, which should further shield the base from view from the 1720 Maple building, located about two blocks to the south.

Smith said she was also concerned about the shift to smaller unit sizes in the change of plans for the development from a some condominiums and some rental units to an all-rental project.

"I don't think Evanston should be inviting in so many smaller units," she said, claiming that the additional units would add to more automobile traffic.

But the developers' attorney, David Reifman, said a new traffic study indicates that there would be 130 fewer daily auto trips generated by the new project than the currently approved plan for the site.

Smith said the city should add a stop light at Oak Avenue and Emerson because it's already difficult for drivers to turn onto Emerson at that intersection.

But the city's traffic engineer, Rajeev Dahal, said the traffic level at that intersection isn't sufficient to justify a traffic signal under state standards.

He said the city plans to reconfigure Emerson Street to eliminate parking on the south side of the street from Ridge to Maple avenues and turn it into a four-lane roadway.

"That will allow traffic to move more smoothly and should create better gaps in traffic to make it easier to turn onto Emerson from Oak," Dahal added.

The project is scheduled to be the subject of a community meeting hosted by Alderman Peter Braithwaite, 2nd Ward, at the Civic Center this evening.

It will go before the Planning and Development Committee and the City Council for introduction Monday night.

The City Council's Planning and Development Committee voted 3-2 in November not to delay review of the plan revisions by sending them back to the city's Plan Commission.

The two buildings, with addresses at 1890 Maple Ave. and 1881 Oak Ave., were initially approved as planned developments by the city in 2006 and 2007 and were given extensions of time to start construction during the real estate market slowdown.