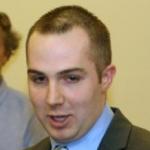 The rescue of a young boy from the frigid waters of the Des Plaines River last March was cited as one of the reasons Evanston police officer Sean O’Brien was selected to receive the January Officer of the Month Award from the National Law Enforcement Officers Memorial Fund.

Officer O’Brien will be honored at a special awards luncheon in Washington in May during National Police Week. In addition, his story of heroism and service will be featured in the Fund’s annual calendar.

Here is how the Fund described his rescue of a 7-year-old boy from the Des Plaines River:

On March 5, 2013, Officer Sean O’Brien was spending his day off running errands with his girlfriend. As they headed home in the midst of a snowstorm, they observed a young boy playing in the snow alone, throwing snowballs at passing vehicles. Out of concern for the boy’s safety, and due to the increasingly dangerous weather conditions that day, Officer O’Brien pulled his vehicle off to the shoulder of the road and set out to speak to the child.

As the officer approached, the young boy became agitated and ran in the opposite direction, straight for the Des Planes River. Officer O’Brien then saw the child pick up a large chunk of snow, hurl it into the freezing water below him, and jump into the river after it.

He turned the car heater up as high as it would go in an attempt to maintain the child’s body temperature and called emergency services. Shortly after, the child was taken to a local hospital for medical treatment and released later that day. Once the boy’s parents were located, they explained that their son had wandered off from his grandmother’s house to play in the snow.