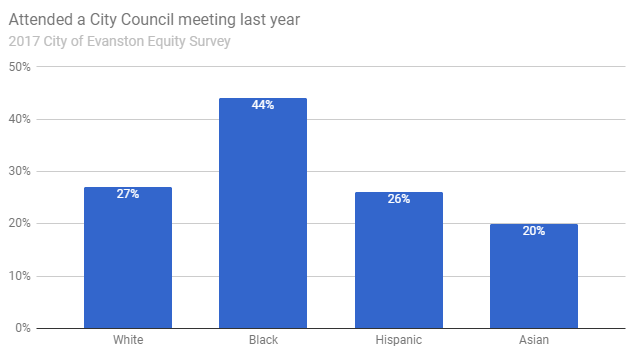 Black Evanston residents are more likely to attend City Council meetings and participate in other community events than their white counterparts.

That is a perhaps unexpected finding of a new equity survey conducted by the city that’s to be discussed at Monday night’s Human Services Committee meeting.

Eight hundred people responded to the survey, which was conducted between June 20 and July 4 and was available in online and paper formats.

Forty-four percent of black respondents said they had attended a City Council meeting in the previous year, while only 27 percent of whites, 26 percent of Hispanics and 20 percent of Asians said they did the same.

Blacks also were most likely to say they had “participated in a community-sponsored event” last year, with 97 percent answering yes to that question. Participation levels for other groups were only slightly lower: 86 percent for whites, 90 percent for Hispanics and 88 percent for Asians.

Much of the impetus for the city’s equity efforts has been premised on an assumption that minority group members are less likely than whites to participate in city government and community activities. 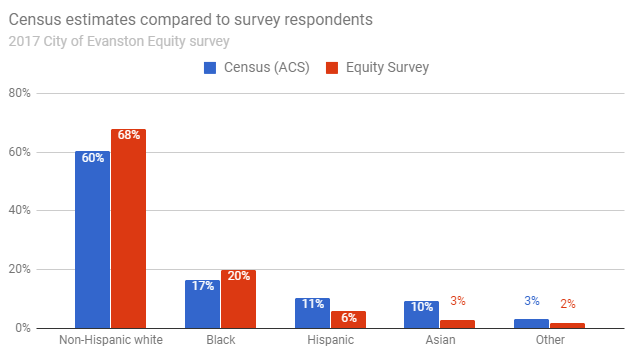 For some groupings, respondents to the survey fairly closely matched demographic data available for Evanston from the U.S. Census Bureau’s American Community Survey, while in other respects they differed greatly.

Whites and blacks were slightly overrepresented among survey respondents, while Asians and Hispanics were more dramatically under-represented. 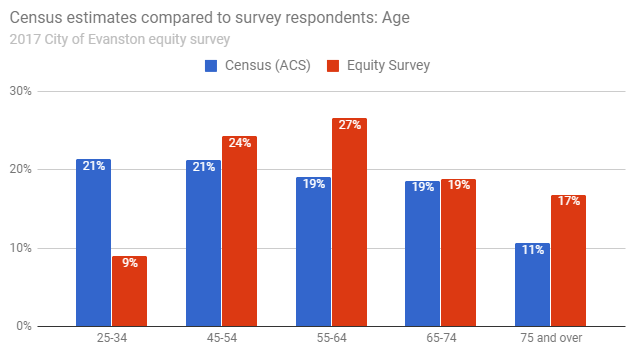 Younger people were underrepresented among respondents to the equity survey, while some older age groups were overrepresented. (The chart compares the share of population 25 and older. Survey and census categories for lower ages weren’t in alignment.)

Women composed 76 percent of the survey respondents, while they make up only 53 percent of Evanston’s population.

In a memo to aldermen, Equity and Empowerment Coordinator Pat Efiom suggested conducting a new study that would place more emphasis on questions about access to city services.

She also argued that a mail-in survey delivered to a random sample of households would be more likely to garner a statistically valid response.