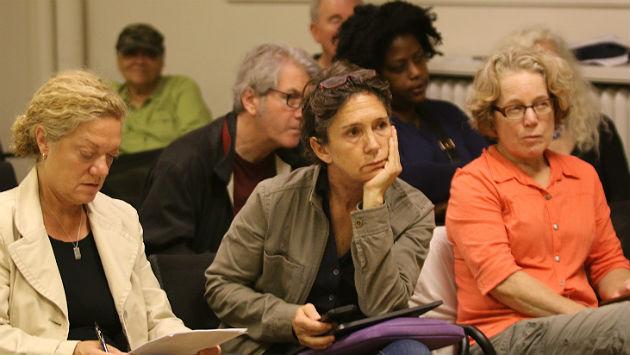 In a 90-minute meeting Tuesday night, Evanston’s Board of Ethics managed to pick some possible dates for its next meetings.

The board failed to approve the minutes of its last meeting, because of disagreement over how a vote was tallied.

And it postponed discussion of the requirements of the state Open Meetings Act because the board’s newest member, Lydia Ellul, wasn’t present.

It postponed a hearing on two complaints against Alderman Ann Rainey, 8th Ward, because Rainey’s attorney was not available.

And it postponed rehearing a complaint against Alderman Robin Rue Simmons, 5th Ward, because, with board members Vincent Thomas and Elizabeth Gustafson recusing themselves, it lacked a quorum to hear the case.

Harley Clarke mansion preservation advocates Lori Keenan and Clare Kelly claim that Rainey violated the city’s code of ethics by supporting and contributing to the community group raising funds to demolish the mansion.

They also claim that during an electoral board hearing on challenges filed against a petition seeking a referendum on the Harley Clarke issue, Rainey, as she left the room, said “fuck you” to Keenan and later told her “Don’t mess with me.”

Another advocate of saving the mansion, Nancy Sreenan, claims Rainey violated the code when she forwarded an email message Sreenan had sent her to members of the group raising funds for the demolition.

Rue Simmons’ attorney, Shawn Jones, argued that the board should never have agreed to re-open Witenberg’s complaint and complained that board member Gustafson appeared to have violated the ethics code when she had dinner with Witenberg earlier this month.

While the draft minutes of the board’s meeting at which it voted to reopen Witenberg’s case recorded Gustafson as having voted for the rehearing, she claimed at Tuesday’s meeting to have abstained from the vote.

The board proposed several dates ranging from Thursday through November as possible dates for hearings on the cases, depending on the availability of the board members, the parties and their attorneys.