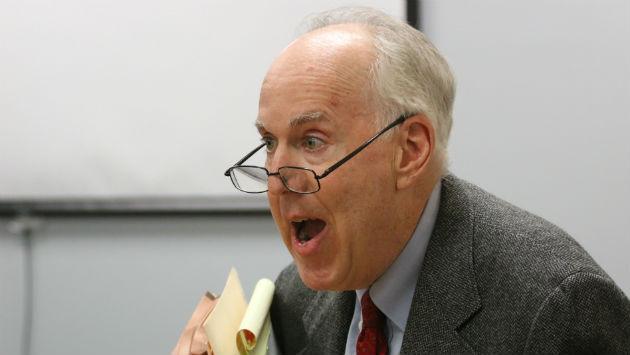 Evanston’s Board of Ethics decided Wednesday night that it has jurisdiction to hear most aspects of two complaints against Alderman Ann Rainey, 8th Ward.

Rainey’s attorney, former alderman Art Newman, argued that the board lacked jurisdiction, that Rainey’s due process rights had already been violated by the board making the complaints public before determining whether it had jurisdiction to hear them and that he would be unable to be present for a hearing on the complaints next week because he would be at trial on another case.

Jeff Smith, an attorney for complainant Clare Kelly, said the board should accept jurisdiction, including over aspects of the complaint that alleged violation of state laws.

The board concluded it lacked jurisdiction of the claimed violation of state laws, but accepted jurisdiction over the other claims and scheduled hearings on the complaint for Thursday, Oct. 25.

Harley Clarke mansion preservation advocates Lori Keenan and Kelly claim that Rainey violated the city’s code of ethics by supporting and contributing to the community group raising funds to demolish the mansion.

They also claim that during an electoral board hearing on challenges filed against a petition seeking a referendum on the Harley Clarke issue, Rainey, as she left the room, said “fuck you” to Keenan and later told her “Don’t mess with me.”

Another advocate of saving the mansion, Nancy Sreenan, claims Rainey violated the code when she forwarded an email message Sreenan had sent her to members of the group raising funds for the demolition.

The chair of the Board of Ethics, Jennifer Billingsley, said she was uncomfortable delaying consideration of the complaints until after the Nov. 6 election, given that the issues involved related to a matter on the ballot.