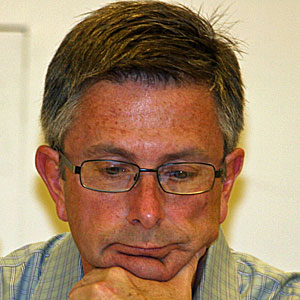 The Evanston Board of Ethics plans Tuesday to review a complaint regarding Alderman Mark Tendam, 6th Ward, and a $1,000 campaign contribution he received from billionaire investor Col. J.N. Pritzker.

The complaint, filed by Nick Agnew and Claire Delgado, asked that the board investigate the matter to determine whether acceptance of the donation violated the gift ban provision of Evanston’s Code of Ethics, whether Tendam complied with Illinois regulations when reporting the contribution and if receipt of the gift is grounds for the alderman to recuse himself from discussion of Pritzker’s applications for zoning relief.

Pritzker, heir to the Hyatt Hotel fortune, has been busy proposing redevelopment plans for Evanston property in recent months.

In December, Pritzker submitted a $1.2 million bid to purchase the Harley Clarke Mansion, — home of the Evanston Arts Center — after the city issued a formal request for bids last year. Pritzker hoped to turn the property into a boutique hotel. That plan, however, was rejected by the majority of the City Council last week, including Tendam.

In February, Pritzker along with Patriot Park, LLC, business partner Dawn Overend filed an application for zoning relief at 1622 Forest Place for the construction of a bed and breakfast — which would be located just two doors away from another Pritzker-owned B&B.

Two weeks after Tendam was reelected to the City Council in April, the ZBA voted against Pritzker’s plan. But Prior to the ZBA’s decision, and nine days after the election, Citizens for Tendam, a committee dedicated to the alderman’s reelection, reported receipt of a $1,000 contribution from Pritzker.

Pritzker appealed the ZBA’s decision, and in July, Tendam and the majority of the City Council voted to allow a special use permit for the property, thus paving the way for the new B&B.

In addition to determining whether the donation was received in a timely and legal manner consistent with both Evanston and Illinois regulations, the complaint also asks that the board amend the Code of Ethics to prevent any candidate for the office of mayor or City Council from receiving campaign contributions from people or entities with pending zoning relief applications.

And lastly, the complaint asks that the board appeal any city council decision involving Pritzker on the basis of potential ethics violations.

The Board of Ethics meeting is scheduled for 7 p.m. Tuesday in Room 2403 of the Civic Center.