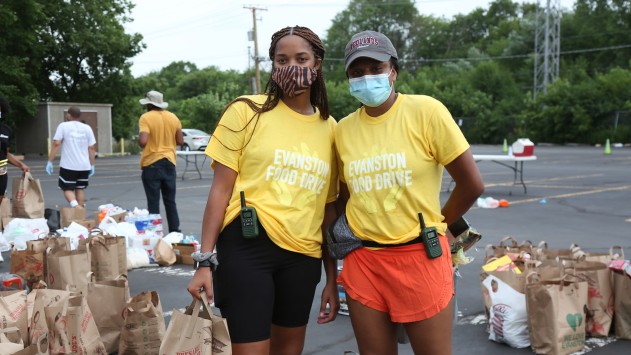 The name has changed, but the goal is the same … helping neighbors in need.

Demand was so great in the midst of the pandemic-ravaged economy that the alums, who dubbed their project “Evanston Gives Back,” held a second drive as well as a Thanksgiving fund-raiser to buy gift cards for hungry families.

Now, the goal is to do even more.

“In some ways our mission has expanded,” says English. Even though the pandemic is diminishing, English says food insecurity and other economic troubles are still very much with us.

So with fellow ETHS alum Margarent Bamgbose (2012) in the leadership as well, “Evanston Gives Back” has been rebranded as “Kula Kitchen.” Kula means community in Sanskrit.

“What prompted the rebrand truly encompasses what we need to do,” says Bamgbose. “It’s a perfect fit for the goal and mission.”

And so this summer, Kula Kitchen will hold four food drives at ETHS, beginning this Saturday July 17. That’s in addition to working with Koi restaurant this past March to give away meals.

English says she particularly appreciates all the volunteers who helped with last year’s drives, as well as all the individuals who donated groceries and money.

“For me,” she says, “it was just all the connections we made. It seems as if everyone came together.”

This summer’s drives will be held at the ETHS parking lot on Dodge Avenue, on July 17, 31, August 14, and 21. Non-perishable food and supplies such as paper towels, napkins, and other dry goods can be dropped off between 10 and 11 am. Distribution is from 11am-1pm.

English says Kula Kitchen hopes to do even more in the future, with a variety of events to help the community.

It’s incredible, English says, “how much there is a need for this.”

For further information on volunteering at the upcoming events, or on how to donate, go to thekulakitchen.com.