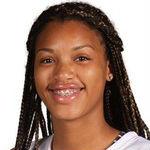 Cooley recently signed a letter of intent to play for Arkansas coach Jimmy Dykes for the Razorbacks.

The 6-foot-3 Cooley was named to the Women’s Basketball Coaches Association All-American honorable mention team in the Junior College/Community College division, the first player in Lady Roadrunners history to earn that accolade. She led SFCC to a 23-6 overall record in her sophomore season, scoring a team high 17.3 points and a team high 11.7 rebounds per contest. She also averaged 2 blocked shots.

At ETHS, she was a two-time all-Central Suburban League South division selection.

“Alecia is an outstanding player,” said State Fair coach Kevin Bucher. “She was the leading scorer and rebounder in most of our games this season. She really improved her game this year, and she was probably the best post player on all the teams I saw play because of her ability to run up and down the floor and post up. She had a great career here at SFCC, and this is a wonderful honor and accomplishment for her.”