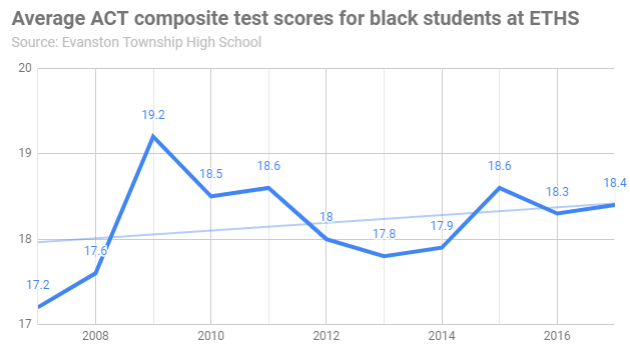 Evanston Township High School board members differed sharply this week on how to interpret trends in performance of black and Hispanic students on the ACT college admissions exam.

A report and presentation to the board shows overall ACT composite scores have improved more than two points since 1972, with the highest composite score of 23.9 achieved in 2015.

The current national average score on the ACT is 21.

Though “we still see disparate outcomes” based on race, “trends are positive for all subgroups,” said Peter Bavis, assistant superintendent for curriculum and instruction, referring to charts, like the one above, that show scores from 2007 through 2017.

Board member Mark Metz saw the report as encouraging, saying “we’re going in the right direction.”

Board member Jonathan Baum agreed that there has been significant progress in some areas. However, he added, “saying we have made significant growth across all subgroups is not quite correct.”

Baum noted that if data for the period 2009 through 2017 were charted instead (as shown below), it would show a decline in the performance trendline for black students.

“This does not look to me like progress,” Baum said.

He added that the district’s report shows no improvement between 2011 and 2017 in the percentage of black students who scored a 24 or higher on the ACT — the score they’d need to be in the top quarter of all students taking the test.

“It isn’t simply that there’s a gap. It isn’t that everyone is getting better. It’s more fundamental than that. We have not cracked this nut,” he said.

“It’s important to maintain our credibility,” he said. “We can’t really grapple with a challenge unless we’re willing to admit it continues to be a really daunting challenge and we don’t sugarcoat it.”

“I agree with you one hundred percent,” said Monique Parsons, board vice president, “when we can start having conversations about the non-school factors.”

“It is so much deeper than what we’re talking about,” she said. “I’m very appreciative of what our school is doing to be creative and keep pushing. But there are community factors that play into this gap that as a board we have not discussed.”

“I don’t think we’ve reached a point to say we are there,” said Pat Savage-Williams, board president. “I’m looking for trends.”

“The challenges are persistent and deep and they’re not going to go away just because we take Beyond Diversity,” she said. “I with that’s all it could be.”

“We’re looking for upward trends,” she said again. “We have to recognize what we’re doing and keep doing it. We have to be persistent and work as a team.”

Superintendent Eric Witherspoon noted that a recent report on the reading program showed that the reading proficiency of incoming black and Hispanic students varies widely and has been as low as 22 percent reading at grade level.

“We have to look at all the factors,” he said, including some we don’t control. “It could be fewer students are entering the high school proficient in reading and we’re still getting that modest gain. That’s why we hired an army of reading specialists.”

“I was not talking about causation,” said Baum. “I was just talking about acknowledging the reality. I’m just reading what it says. It says significant progress for all subgroups” and the data doesn’t show that.

“It has to be taken in context,” Metz responded.

“Every time we look at the data I see that black students are at the bottom,” said Savage-Williams. “That’s why we’re doing the work. We keep challenging the administration about what else we can do. We aren’t done. We continue to take it on.”