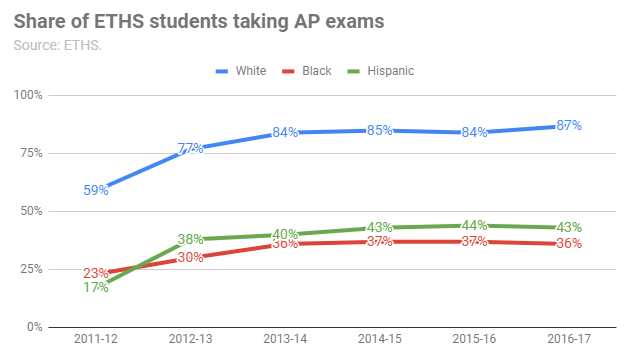 According to the administration’s report, there were more AP scores of 3 or higher in 2017 than the number of AP tests administered in 2010.

This matters because public universities and community colleges in Illinois are required to award college course credit for Advanced Placement scores of 3 or higher, according to Peter Bavis, ETHS assistant superintendent of curriculum and instruction.

To provide the support, a group of students, teachers and school leaders called teamASAP has developed workshops, classes, study guides and other materials to make students aware of AP tests and help them prepare to take them.

Last year, teamASAP members met with students at Lincolnwood elementary and Chute middle schools to promote participation and encourage preparation for AP courses well before kids get to high school.