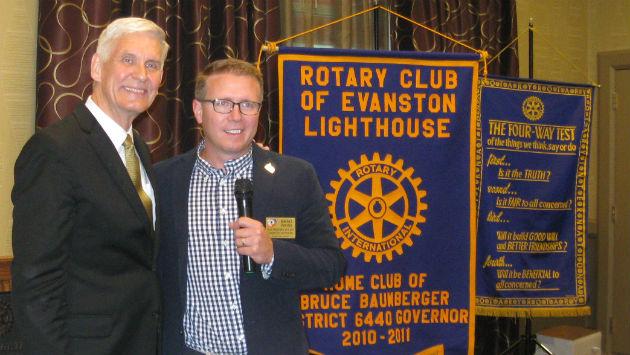 Acknowledging that he may be prejudiced, Witherspoon backed up his claim in a presentation before the Rotary Club of Evanston Lighthouse by noting that the two major organizations that rank high schools nationally—U. S. News & World Report and the Washington Post newspaper—consistently rank the local institution in the top 2 percent of high schools in the nation.

While they rank ETHS among the top 10 schools in Illinois, he said, when one considers the diversity of students at ETHS, “we’re No. 1.”

He noted that the summer break is particularly hard on students from low-income families, who typically fall behind in the summer while their peers from higher income families benefit by traveling worldwide with their families or enroll in high-priced summer camps.

At ETHS, he said, nearly half the students qualify for free or reduced lunch, which is the universally recognized measure of family income.

A great deal of board and administrative attention is spent on boosting the educational outcome of these low-income students, he said.

As a result, the dropout rate currently is the lowest in the school’s history, and the scores on the ACT exam are the highest, as is the number of students taking Advanced Placement courses.

As for diversity, he noted that the student body speaks 57 different first languages in their families, and a group of 10 representative students would include four white, three black, two Hispanic, and one Asian or native American student.

ETHS is a major partner in the communitywide “Cradle to Career” initiative, he said, which is currently focused on improving literacy among Evanston’s young people.

The school has also made great strides in improving its STEM (science, technology, engineering and mathematics) labs, he said, “and our advanced manufacturing lab would knock your socks off.”

Witherspoon concluded that ETHS “is a model for what a high school in America could be.”