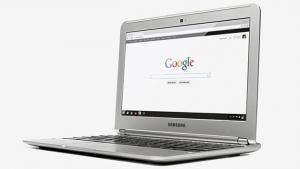 All students at Evanston Township High School, even the Class of 2017, will have been issued Google Chromebooks by the beginning of the next school year in September, accelerating the deployment of computers by a year, the District 202 School Board learned Monday night.

Already the classes of 2018 and 2019 have their computers, and the Class of 2020 is scheduled to receive theirs when they enter the school as freshmen in September. That would leave the Senior Class of 2017 without computers under the former deployment schedule, according to David Chan, director of instructional technology.

The Class of 2017, however, will get theirs at the same time as the Class of 2020 and will be assessed a technology fee of $70, which will enable the computer speedup to be possible “without additional funding of the Instructional Technology budget,” Chan said.

Most of the additional computers will have been salvaged and refurbished, Chan said, but they all will be in good working order and covered by insurance, should they require further repairs.

The accelerated schedule, Chan declared, will “avoid the problem of having mixed classes of juniors and seniors where one group has access to a Chromebook while the other group does not.”

Chan said that classes that are all juniors or all seniors “are few and far between,” which was a point of concern on the part of the faculty.

The deployment of computers began a year ago with the freshman class of 2018 receiving Chromebooks. The Class of 2019 received their computers at the beginning of the current school year.

The school established a Student Tech Center, dubbed the “ChromeZone,” that handles all loaner, warranty, insurance, and invoicing for repairs. Students can earn community service hours by volunteering to help in the center, thereby obtaining valuable experience and education in the fast-growing area of computer repair.

A computer class, “Information Technology Internship (ITI),” enables students, who spend part of their time working in the ChromeZone, to learn both repair skills and communication skills, Chan said, while the other part of their time is spent engaging in independent projects and obtaining certifications.

As for the faculty, at least half of them have had special development training in the use of the computers as an adjunct to their classwork.

Board member Jonathan Baum said he found it “amazing” that so few computers had been lost or stolen. Chan said that special security measures had been taken and that the entire school had been told to turn into the Chrome Zone any computers that were found unattended.