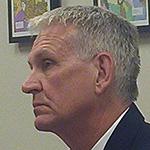 His contract now will run through June 30, 2017. No change was made to his annual compensation of $255,248, nor to his benefits package, according to the district's chief financial officer and board secretary William Stafford.

Witherspoon has 25 years of experience as a superintendent. He began his career as a high school English teacher and was previously a director of a high school gifted education program.

“I appreciate the support of the school board and this contract extension. We are making great strides on accomplishing the district goals and seeing some historic results, Witherspoon said in a statement. "ETHS is a remarkable school, and I look forward to continuing the momentum for achieving better and better outcomes for students."

For the last six years the ACT composite scores have been 23.0 or higher, including the highest ever, 23.9, this year. The number of students taking AP exams has increased 62 percent during Witherspoon's tenure at ETHS.

District 202 Board President Gretchen Livingston said the board "is pleased to extend Dr. Witherspoon's contract so that he can continue his progress in achieving the district goals."

Witherspoon was instrumental in convincing the board to approve a controversial revamp of the freshman humanities and biology programs whereby all students who pass minimal reading standards are placed in classes where they have the opportunity to earn honors credit.

School board members are elected to staggered four-year terms in elections held in April of odd-numbered years, so the new agreement means Witherspoon's deal will extend just beyond the terms of all the board members who voted on it.