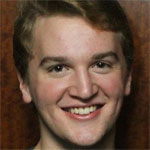 Roman, a 2010 ETHS grad and student at Butler University, first learned of the opportunity two weeks before the event when his choir professor, Eric Stark, mentioned that he had exciting news.

Giving the choir minimal information, Stark announced that a casting agent had contacted him to request that the Butler University Chorale perform during the Super Bowl XLVI halftime show with Madonna.

Roman and his classmates were instantaneously excited and signed the paperwork, accepting the opportunity and agreeing to complete secrecy.

For the next two weeks, the Butler Chorale along with the Indianapolis Symphonic Choir, students from Indiana University and other colleges, and a few members from local gospel choirs had much in store.

Meeting in an Indianapolis high school and at the Super Bowl stadium, the choir of about 200 prepared for their performance.

Roman says, “We had three rehearsals in the stadium, each lasted from 3 to 11 p.m. Being in that environment was … long and hard, but definitely worth it.” Practicing along with the choir were music sensations LMFAO, Nicki Minaj, M.I.A., Cee Lo Green, and of course, Madonna.

On the big day, Madonna performed some of her biggest hits including “Vogue,” “Music,” “Express Yourself,” and her newest single, “Give Me All Your Luvin” featuring Nicki Minaj and M.I.A, and also a mash-up of LMFAO’s “Party Rock Anthem.”

She closed the show with Cee Lo Green, Nick and the accompanying choir by performing “Like a Prayer.”

Roman says he was nervous during the performance, but also excited and he described the experience as “breathtaking. It was pretty emotional and that’s what I think [Madonna] was trying to get across.”

“It was amazing to see her at work and doing what she’s good at, and what she loves,” he said.

As a sophomore Music Education major concentrating in voice at Butler University’s Jordan College of Fine Arts and an aspiring performer and music educator, this experience was encouraging to Nick.

He said, “it really supported the fact that the connections you make while you are proactive in your passion will always help your career and develop you as a performer. It really positively affected what I think is possible. You never know what life has in store, and it really depends on your confidence and perseverance. You never know what’s going to come your way. It made me hopeful that my plans could very well be successful down the road.”

Roman was very involved in the arts and music as a student at ETHS.

He performed in 11 theatrical productions, including YAMO for four years. He also held leadership positions in the ETHS Choir as assistant choral director and the tenor section leader.

He also served as a representative of ETHS in the annual Illinois Music Educators Association conference on the district and state levels, and also travelling with the choir and theatre department to Disney World, Italy and Stratford, Ontario.

He says Mary Theresa Reed, ETHS’s choral director, was one of the people who inspired him most to pursue music education. “She’s essentially why I wanted to be a music teacher,” he said. “I just believe so much in the teaching of choral music. The fact that Madonna wanted a choir meant something very strong to me.”

Camielle Taylor, ETHS Class of 2009, is a student at Northwestern University and works as an intern in the Communications Office at Evanston Township High School.