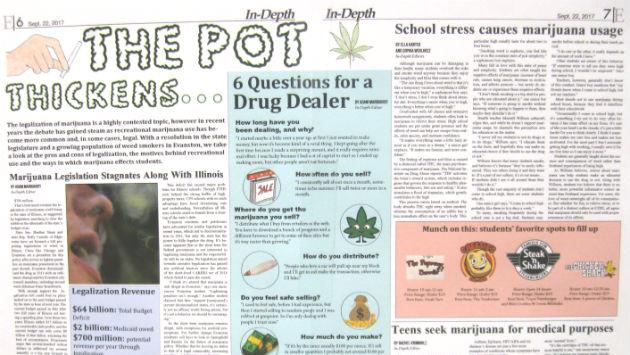 Student journalists at Evanston Township High School plan to meet tomorrow with Principal Marcus Campbell to work out details for implementing a tentative agreement that would allow the redistribution of stories in The Evanstonian that led to confiscation of the school newspaper.

According to Michael Colton, executive editor, an agreement with the administration late last week provided that the stories in the confiscated September 22 issue could be distributed if they include a warning about the dangers of marijuana usage.

Wednesday’s meeting will be for the purpose of determining how that redistribution will be implemented, he told Evanston Now.

“We also plan to talk and lay out some guidelines for the administration respecting and interacting with our publication to protect from this sort of confiscation and ill communication going forward,” Colton said.

Presumably the modified stories about the use of marijuana by ETHS students will be included in an upcoming issue of the student publication.

The articles in question appeared in a two-page spread, on pages 6 and 7, designed to “take a look at the pros and cons of legalization, the motives behind recreational use, and the ways in which marijuana affects students.”

“Marijuana legislation stagnates along with Illinois” examined the progress of state legislation that would legalize the sale and distribution of marijuana in Illinois.

“School stress causes marijuana usage” includes interviews with students about why they use marijuana despite all the health warnings.

“Teens seek marijuana for medical purposes” describes how and why marijuana is prescribed by doctors for patients with certain diseases.

And “Six questions for a drug dealer” is based on an interview with an unidentified drug dealer.

The students contend that the stories are not intended to promote marijuana usage among students and that the action by the administration violates a state law passed last year known as the Press Rights for Student Journalists law, that forbids the school administration from censoring a student newspaper unless certain criteria are met.

The volunteer lawyer assisting the students, Maryam Judar, executive director of the Citizen Advocacy Center in Elmhurst, said that a lawsuit, if necessary, would seek release of the paper and the stories, and it would seek instruction on how the law should be implemented.

What was in those censored drug stories at ETHS?