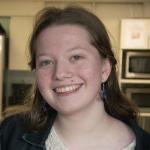 The contest is called Statue Stories Chicago and is co-sponsored by the Chicago Park District. Her category attracted some 200 entries.

Statue Stories Chicago premiered in August 2015, when 30 statues across the city started “speaking their minds.” Chicago writers, actors, and comedians were commissioned to create each monologue, which can be accessed by swiping a smartphone on a plaque near the statue.