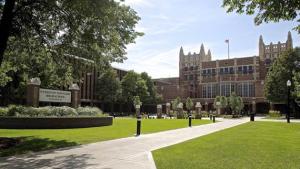 Evanston Township High School placed 17th on the Washington Post’s list of Illinois’ most challenging high schools this year, up from 18th place last year, members of the District 202 School Board were told at its regular monthly meeting Monday night.

Out of the 22,000 U.S. public and private high schools that made the national list, the Evanston school ranked 585th, according to Superintendent Eric Witherspoon.

Witherspoon noted that about one-third of the Illinois schools that ranked higher than ETHS were either private or magnet schools.

While the superintendent did not mention it at the meeting, a check of the list reveals these Illinois rankings of nearby suburban Chicago schools:

Witherspoon said that many of the nation’s finest high schools are in Chicago’s North Shore suburbs.