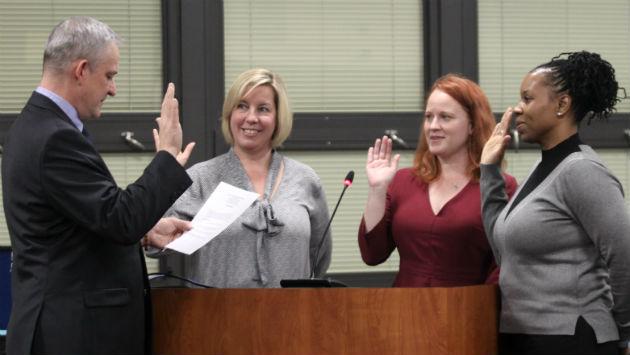 With family members looking on, one incumbent and two newcomers were sworn in to the Evanston Township High School Board Monday night.

Monique Parsons began her second term. Elizabeth Rolewicz and Stephanie Teterycz began their first four-year terms. They were chosen by voters in the April 2 election.

Board President Pat Savage-Williams thanked departing board members Mark Metz, who served 10 years, and Jonathan Baum, a board member since 2011, expressing “deep appreciation for their service.” She presented each with an engraved silver bowl.

Baum said he had many sources of satisfaction over the past eight years, including a role in “bringing more transparency to the work of the board, encouraging more accountability for district programs and making the student disciplinary code fairer.”

“My biggest disappointment has been the failure to end the disjunction and blame-casting that has characterized the relationships between the two school districts for as long as I can remember,” he said. “I really believe we have a duty to provide the students of both districts, who are all ‘our’ students, with a seamless K-12 educational experience.”

Baum closed his remarks by offering unsolicited advice to the new board members. “When it’s a great day to be a Wildkit, celebrate that! When it’s not so great, be brave enough to acknowledge that and work on making it better,” he said.

“Those you are here to serve — our students, parents and taxpayers — are seldom in this room,” he said. “It is they whose esteem you should most prize. It’s easy to lose sight of that.”

Metz said that after 10 years when his children were at ETHS and another 10 years on the board, “ETHS is the best it’s ever been,” though not perfect.

“This position is all about service,” he said. “That’s all that it’s about.”

During public comment, Jim Young thanked Baum for his concern for all kids and thanked Baum’s wife and kids for sharing him with the community.

Liliana Zecker also thanked Baum for his service, citing Theodore Roosevelt, “It’s not the critic who counts,” she said. “The credit belongs to the man who is actually in the arena, whose face is marred by dust and sweat and blood, who strives valiantly.”

The new board re-elected Savage-Williams as president and Parsons as vice-president, both unopposed and on a 6-0 vote, with member Gretchen Livingston absent from the meeting.