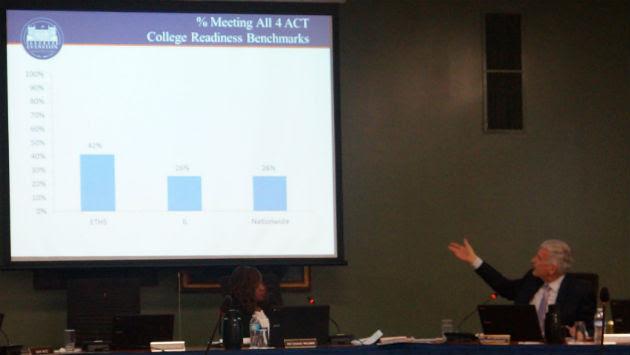 Nationwide, only 26 percent of students are considered college-ready by ACT.

The district’s composite ACT score was 23.3 out of 36, the third highest scores achieved at ETHS since 1973. These are the second highest scores posted by ETHS students since ACT adopted a universal reporting policy.

“It’s important to note that prior to 2013, students who required extra time were not included in the reporting from the ACT, so that makes this accomplishment all the more interesting,” said Assistant Superintendent Peter Bavis.

Nationally, 26 percent of students met each of these benchmarks.

According to ACT, students who meet a subject benchmark stand a 75 percent chance of getting a C or better in their college classes on the same subject. However, Bavis said that these scores are not hard-and-fast predictions.

Superintendent Eric Witherspoon echoed Bavis’s sentiments. “We pay attention to this, I’m proud of our kids, I can’t believe how much they outpace the rest of the country on this, but take it for what it’s worth,” he said.