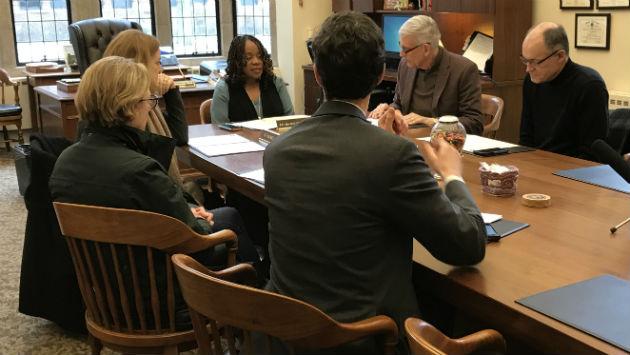 The Evanston Township High School Board of Education this afternoon approved spending $100,000 to settle four lawsuits charging sexual abuse by a former drama teacher decades ago.

According to a statement issued by ETHS, “instead of paying any settlement amounts to the plaintiffs, the school district will spend a total of $100,000 over the course of the next ten years to enhance already existing programs” that address sexual assault awareness, reporting and prevention.

Suits filed by two former ETHS students in October 2017 claimed drama teacher Bruce Siewerth engaged in sexual conduct with male students who graduated in the late 1970s and early 1980s. A third lawsuit was filed later and fourth individual was considering a suit.

In return for the settlement, plaintiffs have agreed to dismiss their complaints against the district but will continue their case against the Siewerth.

The district maintains that it did not have knowledge of any of the allegations made against Siewerth.

The controversy came to light when two former students, Jeffrey Lieber and Ben Wesler, alleged that they had been abused by Siewerth. After learning of the allegations, School Superintendent Eric Witherspoon asked police to bar the teacher from attending the school’s YAMO student production, to which Siewerth had apparently purchased a ticket.